Climate change poses new challenges in the area of food safety. The need for adequate attention to ensure food safety and preparedness to manage situations arising from extreme weather events has been addressed by the Food and Agriculture Organization and has raised awareness in the international communities. Here, we will go through the implications of climate change and how we can mitigate the food safety risks posed by these events.

Climate change has a number of different effects on the frequency and severity of food safety problems. A single environmental condition, such as rising temperatures, can have a range of effects on different contaminants—for example, increasing the survival chances of foodborne micro-organisms as well as modifying the patterns of occurrence of chemical contaminants (Figure 3). 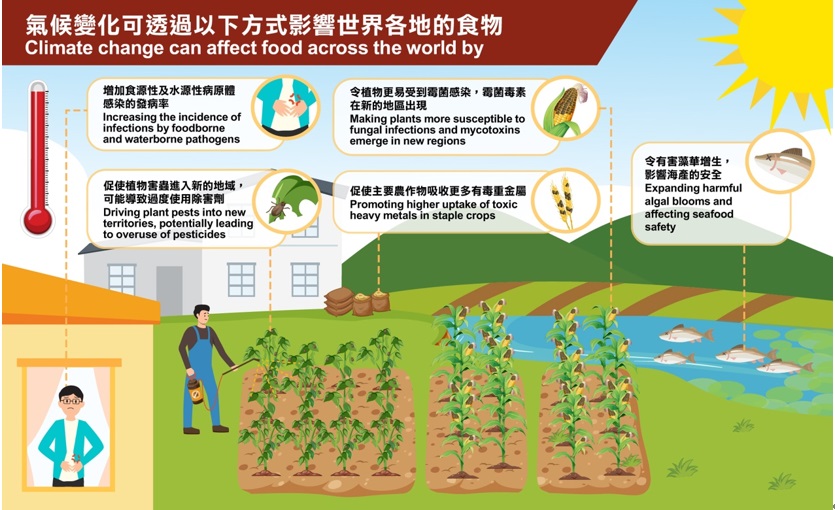 Extreme temperature, precipitation and other environmental factors all have an impact on the geographic distribution and persistence of foodborne pathogens and parasites. Infections caused by Salmonella and Campylobacter species, for example, are strongly linked to rising temperatures. Vibrio species are significant foodborne pathogens that cause infections, sometimes deadly, when raw or undercooked seafood is consumed. Warming waters and rising sea levels favour the growth and spread of this bacterium, leading to more frequent recalls of raw oysters in oyster-producing areas.

With cooler temperate zones becoming warmer and hence more favourable to agriculture, agricultural pests and hazardous fungal species are finding new homes. Aflatoxins, which were once thought to be a concern only in tropical places, are now well established in other geographical zones and regions. Inadequate storage and transportation infrastructure, particularly under climate change conditions, is increasing the risk of the development and spread of mycotoxins such as aflatoxin and ochratoxin.

While algae are an inherent part of the aquatic ecosystem, increased sea surface temperature due to climate change can cause the algal blooms occur more frequently. Such blooms have the potential to shade out all other maritime plants and creatures. When algal blooms die and decompose, they deplete the area's oxygen supply, leaving zones unsuitable to other forms of life.  Additionally, certain algae species create toxins toxic to fish, shellfish, marine animals and birds. When ingested, these algal toxins can bioaccumulate in fish and shellfish, causing toxic syndromes in humans. Ciguatera poisoning, for example, is caused by ciguatoxins and is a significant foodborne issue in the Pacific region.

Environmental Contaminants and Chemical Residues in the Food Chain

Methylmercury in fish is a significant public health concern because it is toxic to humans' nervous, immune and digestive systems. It also poses a threat to a child's development both in utero and in early life. Ocean warming promotes mercury methylation and subsequent uptake by fish and marine mammals, thereby increasing human exposure. On land, severe rains can contaminate the surrounding area with a variety of hazardous metals, jeopardizing food and water quality. Additionally, higher soil temperatures can facilitate harmful metal uptake by plants, such as arsenic in rice. Shifting rainfall patterns and rising temperatures can also drive crop pests and zoonotic microorganisms into new territories, leading to the overuse of pesticides and veterinary drugs in foods.

Because of the wide variety of foodborne illnesses and the impact that climate change has on their occurrence, various stakeholders have to work together to achieve food safety. It takes the food industry to adopt good-practices guidelines and establish effective food safety systems to make safe food, and food safety experts to manage food contamination risks under climate change. Likewise, consumers have a critical role to play in the context of climate change's consequences for securing food safety. The Five Keys to Food Safety, developed by the World Health Organization, provides evidence-based, clear and simple messages on addressing foodborne diseases from farm to table amid increasingly challenging environmental issues such as climate change. Empowering consumers to make healthy food choices within the context of sustainable food systems is a collaborative effort including government agencies, the agri-food sector, consumer associations, media, educators and the scientific community at large. The Centre for Food Safety will continue to monitor the market for levels of contaminants in food.