In June 2012, two fatal Vibrio vulnificus infection cases, including one causing necrotizing fasciitis (also known as flesh-eating disease), a serious bacterial infection that spreads rapidly and destroys the body's soft tissue, were reported to the Centre for Health Protection (CHP) of the Department of Health. Available information showed that both patients had underlying medical conditions and one of them had consumed raw mantis shrimp. In this article, we are going to talk about Vibrio vulnificus and its food-related risk.

V. vulnificus is a bacterium naturally found in warm seawaters and estuaries. It is not surprising to find this bacterium in seafood that grows in these waters especially during summer months. High levels of V. vulnificus may even be present in bivalve molluscs like oysters due to their filter feeding activity that concentrates bacteria in water.

Although illnesses caused by V. vulnificus are relatively rare, with no foodborne outbreaks have ever been reported worldwide, this bacterium is a serious health threat predominantly to those with underlying chronic diseases, particularly liver disease or alcoholism, diabetes, haemochromatosis and HIV/AIDS.

V. vulnificus infections are either foodborne or wound associated. People may contract the disease by eating contaminated raw or undercooked seafood or by exposure to seawater through an existing open wound or puncture wound caused by handling raw seafood.

Incubation period of foodborne V. vulnificus illness ranges from twelve hours to several days. In general, foodborne infection in healthy individuals is rare, but V. vulnificus can occasionally cause self-limiting gastroenteritis characterised by fever, vomiting, diarrhoea and abdominal pain. Nevertheless, the bacterium can cause primary septicaemia (blood infection), a serious and often fatal disease, in susceptible individuals as stated above.

On the other hand, wound infection caused by V. vulnificus can occur in both healthy and susceptible individuals, while the latter are at higher risk for invasion of the bacteria into the bloodstream and potentially fatal complications. The symptoms may appear within as few as four hours.

V. vulnificus is susceptible to extreme temperatures. Refrigerating food can minimise and/or prevent the growth of the bacterium. Cooking is an effective way to minimise the likelihood of illness arising from the consumption of V. vulnificus contaminated food. Always cook seafood, especially shellfish thoroughly before consumption. For shellfish in the shell, remove the shells before cooking if possible as they impede heat penetration or boil them at 100°C until their shells open; boil for additional three to five minutes afterwards.

Even though many people like consuming some shellfish live and raw or after insufficient cooking, susceptible subpopulations who are at greater risk of severe V. vulnificus infection should always avoid consuming raw or partially treated seafood and cook seafood thoroughly before consumption. Even though seafood specifically intended for raw consumption is harvested from waters with controlled faecal contamination, they are not free from V. vulnificus risk as the bacterium is naturally present in marine environments. In addition, both healthy and susceptible subpopulations should protect their skin when handling raw seafood like fish and shellfish, such as by wearing protective gloves, and avoid exposure of open wound to seawater or raw seafood harvested from seawater. 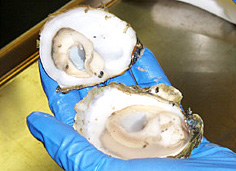 In the U.S., considerable amount of V. vulnificus illnesses are associated with consumption of raw Gulf Coast oysters (Photo by courtesy of National Oceanic and Atmospheric Administration, U.S.A.)

Advice to the Public, Especially the Susceptible Individuals