This is the first in a series of three articles on the toxins produced by fungus in food. These naturally occurring toxins, known as mycotoxins, are produced by certain species of fungi (moulds) and are toxic to both human and animals. This article will provide a general background on major mycotoxins in food.

Mycotoxins in the Food We Eat

As consumers, we might have encountered mouldy peanuts and apples in the past. Chances are that those foods might also be contaminated with toxins produced by the moulds. Natural fungal toxins in food have been affecting human for a long time. Human poisoning resulting from mycotoxin contamination has been recorded since the Middle Ages. However, the modern study had only developed in the 1960s, after 100 000 young turkeys were killed in England due to peanut meal contaminated by fungal toxins.

Later in 1967, 26 people in Taiwan were affected by suspected food poisoning and three children died. It was found that the rice from the households that contained high level of aflatoxin had caused the acute poisoning. Sporadic outbreaks of mycotoxins poisoning are still being reported in recent times, especially in developing countries in Asia and Africa. In 2004, there was a major outbreak of mycotoxin poisoning in rural Kenya resulting in 317 cases and 125 deaths. Contaminated maize with high levels of aflatoxin was the culprit.

How Do Mycotoxins End Up in Food?

Some scientists suggest that the toxins, produced as a defence against other moulds and animals on their source of food, can be developed before harvest and during storage. The growth of toxin-producing fungi can happen in large varieties of agricultural products like cereals, oilseeds, fruits etc., that are susceptible to mould infestation under high temperature and humidity. Crops that are under environmental stress or attacked by insects are especially susceptible to such infestation. Fungi may not be visible in affected grain products due to processing, but the toxins may have already diffused into the grains during the growth period.

Although most mycotoxins in food are found in grains and their products, the toxins can sometimes find their way into milk, liver and kidney of animals that have consumed contaminated feed. 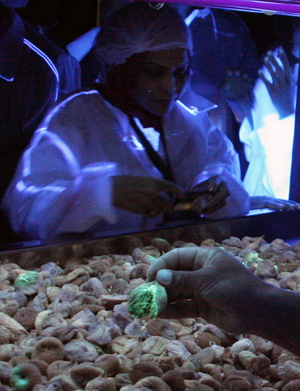 The use of UV light can help identify certain types of mould infestation in dried figs. (Photo by courtesy of Dr. Y.Y. HO)

The economic impacts of mycotoxins in food include significant losses in terms of trade and food, loss of income and livelihood to farming communities, costs of healthcare and veterinary treatments. It has been reported that US$750 million each year of export trade of cereals, dried fruit and nuts to the European Union are lost in nine African countries alone due to aflatoxins. The Food and Agriculture Organization has estimated that 25% of the world's food crops are significantly contaminated with mycotoxins.

Mycotoxins can cause a wide range of health effects in humans. Although acute mycotoxin poisoning is rare, some mycotoxins can cause cancers in the long run. Certain toxins have specific effects like affecting the immune system, liver or kidney. Since they are so widespread in nature, the total elimination of mycotoxins from food is impossible. However, careful control of farming practices like selection of crop varieties, harvesting, proper storage of harvests and appropriate processing can help reduce the amount of mycotoxins in food.

In the next issue, we would talk in more details about the most common mycotoxins – aflatoxins.