On 8 January 2009 , the Centres for Disease Control and Prevention (CDC) of the United States (US) reported an ongoing multistate outbreak of human infections due to Salmonella serotype Typhimurium. To date, more than 600 persons infected with the outbreak strain and infection may have contributed to nine deaths in patients (eight aged 59 years old or more; one elderly female whose age was not reported). Half of the cases have occurred in people who are less than 16 years old. Among reported onset dates, illnesses first started from 1 September 2008 .

Tracing the Source in the US

At the beginning, CDC staff noted a group of cases in different states in the US caused by Salmonella Typhimurium with same genetic fingerprint. Epidemiological analyses including interviewing the patients were then initiated to trace the source of outbreak. The interviews for patients and control groups showed that patients were more likely to have eaten peanut butter. The bacterium was subsequently identified from containers of peanut butter. These results have led CDC and US Food and Drug Administration (FDA) to confirm the sources of the outbreak were peanut butter and peanut paste produced by Peanut Corporation of America (PCA) at its Blakely , Georgia processing plant. The PCA distributed potentially contaminated products to more than 300 consignee firms for use as ingredients in hundreds of different products. On 9 January, PCA voluntarily stopped production at the concerned plant. Inspection at the plant indicated that the plant failed to comply with good manufacturing practices (GMP) required by FDA; in addition, other Salmonella strains were found in the plant but the strains have not been connected with any illnesses. It was also revealed that products with Salmonella identified in the PCA internal testing during 2007 to 2008 had been released into the marketplace.

Meanwhile, recalls on products containing peanut butter and other peanut materials from the plant have been announced on the FDA website . More than 2 200 products including pet food have been recalled until now. Subsequent to finding irregularities in the inspection, PCA has expanded the recall to include all peanut products produced on or after 1 January, 2007 in the concerned plant.

Salmonellae are bacteria found in the intestinal tract of man and animals. More than 2 500 serotypes of salmonellae have been identified and Salmonella serotype Typhimurium is common in the US . Locally, Salmonella Typhimurium, following Salmonella Enteritidis, is the second most commonly isolated serotype. Symptoms of Salmonella infection include nausea, fever, abdominal pain, diarrhoea and vomiting; deaths are uncommon, except in the elderly, the infants, the debilitated and those with impaired immune systems.

Food may be contaminated by salmonellae in animal faeces and cross-contamination may occur during further processing and preparation. Salmonellae may survive in the environment and equipment of food-processing facilities.

In general, peanut butter does not support the growth of bacteria because it has very little water. Nevertheless, salmonellae can survive well in peanut butter after it is contaminated. In addition, some of the Salmonella serotypes need a very low dose to cause disease when ingested with fatty food such as ice-cream and chocolate, which protect the bacteria from the lethal effect of the acid in stomach.

Actions in Response to the Incident

To closely monitor the incident, the Centre for Food Safety (CFS) has been in close contact with the US authorities since the start of the incident. On 29 January, FDA informed CFS that certain batches of the Health Valley brand "Organic Peanut Crunch Chewy Granola Bars" suspected to be contaminated with Salmonella had been exported to Hong Kong . The CFS has taken immediate follow-up action to contact the local importer and requested them to withdraw the affected product from the market. The CFS made a public announcement on the same day. The public was advised to dispose of them and thoroughly wash their hands afterwards.

Illustration: Several batches of the below peanut granola bars were recalled in Hong Kong 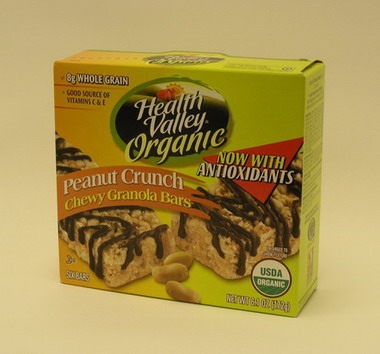 Starting from 11 January, more than 36 rapid alerts have been issued to traders regarding the recalled products in the US to remind them to stop selling of the affected products, if available.