Parasites are organisms that can live on or in a host as well as to derive benefit from or at the expense of its host. They can be found on various kinds of food, such as meats, seafood and fresh produce, despite some of them may not be commonly known of harbouring parasites. Two main types of parasites found in food are protozoa and helminths (also known as worms).

Similar to bacteria, protozoa are single cell organisms and generally can be seen under light microscope. Yet, they are not able to multiply in food but in humans. Some protozoa produce cysts (closed sacs), which can resist destruction by gastric juice in stomach and help protozoa to transmit in food or environment. Infective dose is generally believed to be low and some protozoa may only require a few cysts to cause disease. Toxoplasma gondii and Giardia lamblia are common protozoa found in raw or undercooked meat and contaminated water respectively.

Helminths are larger organisms that compose of multiple cells and can vary a lot in size; some can grow up to more than six meters long. In their adult form, helminths cannot multiply in humans. Common helminths found in food are shown below:

Eggs laid by helminths can be found in faeces, which can reinfest the host or release to the environment to infest other hosts. One of the roundworms, called pinworm, can lay eggs around anus, which cause intense itching. Children harbouring the worm may reinfest themselves by harbouring the eggs under their fingernails after scratching around the anus and subsequently transfer the eggs back to the mouth. 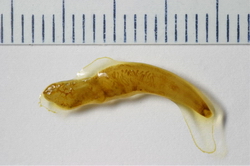 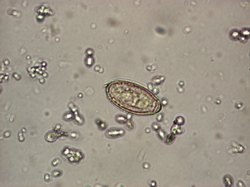 Some parasites are free-living, while some require to parasitise other organisms in whole or some part of their life cycle. There may be more than one host in the life cycle of the parasite. Sometimes humans help the spread of parasites by being a definitive host which a parasite reaches sexual maturity and reproduces.

The life cycles are quite different depending on the types of parasites. Some protozoa are transmitted through faecal-oral route via infested food handlers or fresh produce nourished with faecal contaminated water. Some parasites, like flukes and tapeworms, have complex life cycles in which some unrelated hosts may be involved at different stages. For example, the flukes mentioned above need to go through some developmental stages in the snail before reaching the food vehicles that are consumed by humans.

Prevention of Parasites in Food

Most parasitic cases are caused by consumption of raw or undercooked food, such as fresh produce, some Chinese food like "drunken" crab and congee with undercooked grass carp slices, and food without thorough cooking by hot pot or barbecue. Washing and peeling can help to prevent certain parasites on the surface of fruits and vegetables. But the more effective way to prevent parasitic disease is to cook food thoroughly.

Besides foodborne transmission, faecal-oral route is another important route of transmission of parasites. Strict observance on personal hygiene can help to avoid parasitic infestation. Parasites may be disseminated during various parasite stages, such as cyst and eggs, in the faeces. This is not only for humans but also for animals, e.g. Toxoplasma gondii can be found in domestic cat faeces. Hence, it is crucial to wash your hands thoroughly, especially before handling food, after going to the toilet and after handling pets and their waste.