There have been incidents regarding accidental consumption of desiccant from time to time. Desiccant is used in food packages to help maintaining a low relative humidity, which in turn can limit mould growth and extend shelf-life. Commonly used desiccants include silica gel and calcium oxide.

Silica gel is in form of small beads. It is chemically and biologically inert, so it is not expected to cause harmful effects if accidentally ingested in small amount.

Calcium oxide, also called quicklime, is a white powder. It becomes caustic when in contact with moisture and may cause burning sensation, stomach cramps and diarrhoea if swallowed accidentally.

Desiccant is not a food and thus usually marked with bilingual warnings against consumption, e.g., "Do Not Eat 請勿食用 ". Consumers are advised to discard the desiccant once the food package is opened to avoid accidental consumption, particularly by children and the elderly, and not to eat the food if the sachet of desiccant is found broken. 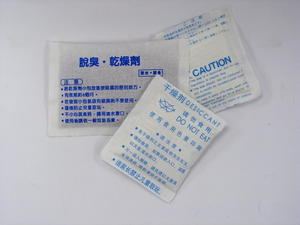