On 26 October 2015, the International Agency for Research on Cancer (IARC), the cancer research arm of the World Health Organization (WHO), issued the latest evaluation on the carcinogenicity of consuming processed meat and red meat. The IARC, based on the strength of evidence and not on the level of danger, has classified processed meat as "carcinogenic to humans" (Group 1) and red meat as "probably carcinogenic to humans" (Group 2A). WHO subsequently issued a statement on 29 October 2015 to clarify that the 2002 health advice that "moderate consumption of preserved meat to reduce the risk of cancer" still stands.

How the IARC Links Processed Meat and Red Meat with Cancer?

Carcinogens may form during the manufacture of processed meat such as curing and smoking. Nitrates and nitrites used for curing meats may be transformed by bacteria in the human digestive tract to N-nitroso compounds, of which some are potentially carcinogenic. Moreover, cooking red meat at high temperatures (200℃ or higher) like barbecuing can produce heterocyclic aromatic amines and polycyclic aromatic hydrocarbons which are known or suspected carcinogens.

The IARC evaluation is based on a large amount of epidemiological data among different diets and populations related to colorectal cancer. Red meat refers to unprocessed mammalian muscle meat e.g. beef, pork, lamb, mutton, and goat. Processed meat refers to meat or offal that has been salted, fermented or transformed by other methods to improve preservation or enhance flavour, for example, sausages, corned beef, and jerky. Substances such as N-nitroso compounds, haem iron and heterocyclic aromatic amines present in meat have been identified as part of the mechanism linking meat consumption and cancer formation. 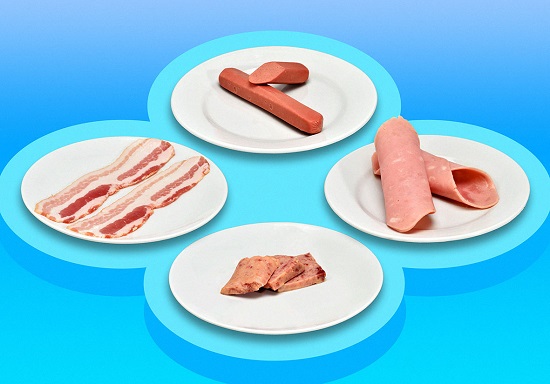 Examples of processed meat, each weighs about 50g

The IARC concludes that each 50g portion of processed meat consumed daily can increase the risk of colorectal cancer by 18%. The risk increases with the amount of meat consumed, but no "safe" level can be devised. On the other hand, the evidence of the relationship between cancer and red meat, though substantial, is not as conclusive as processed meat. The IARC also states that "for an individual, the risk of developing colorectal cancer because of their consumption of processed meat remains small." However, considering the large number of people who consume processed meat, it is of concern on a global basis.

How Common is Colorectal Cancer?

Data from the Hong Kong Department of Health indicates that colorectal cancer is the second commonest cancer and the second leading cause of cancer deaths accounting for 1,981 deaths in 2013. Worldwide, the WHO reports that colorectal cancer is the third and second commonest cancer in men and in women respectively, causing a total of 694,000 deaths in 2012. WHO estimates that 50,000 and 34,000 of cancer deaths could be attributed to excessive intake of red meat and processed meat respectively.

Should We Change Our Eating Habits?

Even though the consumption of processed meat and red meat has been associated with colorectal cancer, the WHO is not advising people not to eat processed meat or red meat as these contain high value proteins, vitamin Bs, iron and zinc. The WHO has noted the nutrition benefits from meat and suggested that we shall balance the risks and benefits of meat consumption. The WHO statement has reconfirmed a recommendation from its 2002 "Diet, nutrition and the prevention of chronic diseases" report that people should moderate the consumption of preserved meat to reduce the risk of cancer. A WHO standing group of experts will meet in early 2016 to review the latest information on the public health impact of processed meat and red meat in the context of overall healthy diet.

Cancer is associated with many factors, including a diet low in dietary fibre and high in processed meat and fat, physical inactivity, obesity and smoking. Hong Kong people consume about 66g of red meat and 33g of processed meat per person daily on average among consumers of these products, which falls within the IARC's reported world average red meat intake of 50 to 100 g/person/day.

There is evidence that certain components from food, e.g. vitamin C, calcium, chlorophylls, polyphenols, etc., can inhibit the formation of N-nitroso compounds or other cancer causing agents. As a major prevention strategy against many cancers, the WHO recommends eating more vegetables and fruits but less processed meat and red meat.