In the last issue, we discussed some home cooking methods in which water or oil is used as the medium of heat transfer. In this issue, we focus on barbecued food and provide tips to reduce its associated food safety risk. 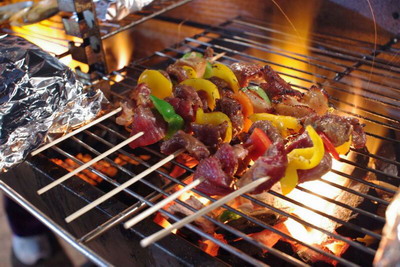 Polycyclic aromatic hydrocarbons (PAHs) and heterocyclic amines (HCAs) are the most concerned process contaminants in barbecued food. PAHs and HCAs are two large groups of organic chemicals in which some of them are carcinogenic or probably carcinogenic to humans. Formation of PAHs and HCAs increases as temperatures rise. When food is in direct contact with a flame at temperatures above 200oC, pyrolysis of fats in food generates PAHs. HCAs are formed when components of food proteins, notably creatine/creatinine are exposed to high temperatures. Foods cooked at below 160oC generally have very low or undetectable levels of HCAs.

Barbecued food may contain higher levels of PAHs and HCAs because the cooking temperatures of barbecuing are usually higher than that of common home cooking methods such as boiling and steaming. For example, roasted pork is normally grilled/roasted with medium to high heat (over 330oC), BBQ pork with medium heat (over 220oC) and roasted duck with low to medium heat (160 – 200oC). In addition, unlike other home cooking methods which usually separate food from direct contact with the heat source, barbecue setting/equipment may allow melted fat to drip onto the heat source such as hot charcoal. This will deposit more PAHs on the food surface as the smoke rises. In general, barbecued food prepared by broiling (heat source above the food) may contain less PAHs because it prevents melted fat from dripping onto the heat source. Furthermore, incomplete combustion of fuels like charcoal or wood would generate PAHs. Therefore, barbecued food prepared by charcoal grilling may contain higher levels of PAHs than gas/electric grilling.

The Joint FAO/WHO Expert Committee on Food Additives (JECFA) concluded that the level of estimated dietary exposure to PAHs were of low concern for human health but exposure to PAHs should be as low as practicable. Consumers are advised to have a balanced and varied diet, avoid overindulging in barbecued food, not to cook food for too long or at too high temperature and may consider other cooking methods such as boiling and steaming. In addition, JECFA has recommended avoiding contact of foods with flames, and barbecuing food beneath the heat source. Consumers who would like to enjoy barbecued food may choose food types which will generate less PAHs and HCAs. It is reported that more HCAs are present in cooked foods with high muscle (protein) content, such as meat, poultry and fish while very little HCAs are found in other sources of protein (e.g. eggs and tofu). Furthermore, consumer may choose/prepare certain barbecued food with the inedible peel/shell (e.g. sweet potato and corn with peel; bivalve and crustacean with shell) when go barbecuing to prevent deposition of PAHs onto the edible portion.

Apart from the risk of PAHs and HCAs, another food safety concern of barbecued food is microbiological contamination. Although lower cooking temperature and shorter cooking time generate less PAHs and HCAs, food should be cooked thoroughly to destroy foodborne pathogens. Public and the trade are advised to follow 5 Keys to Food Safety when preparing barbecued food.