This is the second article in a series on the relation of food, carcinogens and cancer.

How do Carcinogens Act?

A carcinogen is a substance that can cause cancer. Carcinogens can be classified according to their mode of action into genotoxic and non-genotoxic. Genotoxic carcinogens induce cancers via a mechanism involving direct damage to DNA. For this type of carcinogens, it is assumed that no level of exposure is entirely safe and even at low levels, some damage to the genetic material may increase the chance of developing cancer. Therefore, no safe reference value can be established. For non-genotoxic carcinogens, instead of acting on DNA, they induce cancers through other mechanisms such as disrupting structure of the cell, changing the rate of cell division and other processes that increase the risk of genetic error. There is usually a threshold dose for non-genotoxic carcinogens, below which no toxic or carcinogenic effects are seen.

Evaluation of Substances for the Likelihood of Causing Cancer

Carcinogenicity refers to the ability or tendency to produce cancer. As evaluation of the carcinogenicity of substances involves complicated processes and complex scientific judgement, the work is often coordinated by esteemed cancer research organisations such as the International Agency for Research on Cancer (IARC) of the World Health Organization (WHO). When evaluating the carcinogenicity of substances to humans, IARC considers the body of evidence as a whole in order to reach an overall evaluation. The substances are classified into four groups according to the strength of evidence derived from studies in humans and in experimental animals and other relevant data. 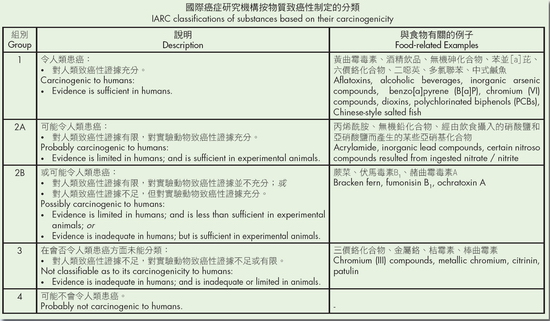 Cancer is caused by a variety of factors. The most important established cause of cancer is tobacco smoking; others include diet, alcohol consumption, physical activity, infections, hormonal factors and radiation. According to the WHO, dietary factors are estimated to account for about 30% of cancers in industrialised countries, making diet second only to tobacco as a theoretically preventable cause of cancer. This proportion is thought to be about 20% in developing countries. Hence, you can reduce your risk of developing cancer by having a healthy diet and lifestyle. The WHO, besides stressing the importance of maintaining suitable body weight and regular physical activity, gives the following recommendations related to foods and drinks:

In the next issue, we will go into more details about certain food carcinogens and the measures to reduce their levels in foods.