Genetically modified (GM) foods have been marketed for about 20 years, however, they are still not accepted by some consumers. In the previous issue, we said that GM foods are made for specific aims. In this issue, we will talk about some features of GM foods that are already on the market. Concerns related to GM food will also be discussed.

The majority of GM foods on the market are GM crops and the most common GM crops are soya bean, corn, cotton and canola (in the order of the size of planting areas). As GM crop developers initially wanted the producers or farmers to accept their products, development of GM crops with traits that alleviates common problems associated with crop yield has been the main focus. Beneficial characteristics, such as herbicide tolerance and insect resistance, are introduced to enhance crop protection. For GM crops with genes conferring tolerance to specific herbicides introduced, they are tolerant to the specific herbicides while weeds grown around them are killed. For insect-resistant crops, insect resistance is achieved by incorporating into crops genes encoding insecticidal proteins such as Bt proteins from the microorganism Bacillus thuringiensis. Because of the more effective use of herbicides and insecticides, the quantity of these pesticides used can be reduced. 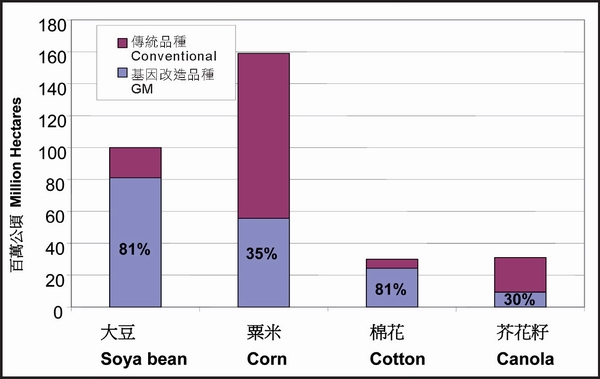 Figure: Global adoption rates for principal GM crops, including those for food, feed or other uses.
[Source: International Service for the Acquisition of Agri-biotech Applications (ISAAA), Global Status of Commercialized Biotech/GM Crops, 2012]

Furthermore, GM crops with different characteristics can be combined by conventional crossing to generate advanced lines with multiple characteristics. The resulting GM crops are said to be with stacked traits. This is common for GM corns and GM cottons.

Apart from traits related to crop protection, GM food with modified nutritional content is also available and this may be another direction of future GM food development. For example, fatty acid content of soya bean is modified in order to provide a stable vegetable oil that is suitable for frying application without the need for hydrogenation. This reduces the formation of trans fats due to partial hydrogenation.

As for GM microorganisms, they are more commonly used for producing proteins or enzymes for use as food additives and processing aids. The natural sources of these substances are limited. With modern biotechnology, genes of these substances can be put into yeasts which can then produce the substances in large amount. Furthermore, a few yeast strains have been developed for wine industry to reduce contaminants that may be formed during production process or storage.

Despite the benefits of the GM foods mentioned, some people argue that the modification will cause harm to health.

GM foods usually involve the addition of new genetic materials. Some people worry that the modified gene, particularly genes that carry antibiotic resistance, may be transferred to human cells or bacteria in human guts, which may subsequently affect human health. Actually, the probability of gene transfer is very low. As a precautionary measure, international organisations have recommended the production of GM foods without antibiotic resistance genes which are commonly used for identification of transformed cells during the development of GM crops. As a matter of fact, vegetables, meats or other foods that we are eating also contain genetic materials of their source organisms but we rarely worry about the problem of gene transfer.

Another concern about GM foods is the newly introduced genes may express new allergen. This had happened during the pre-commercial development of a GM crop but no incident related to allergic effect of commercialised GM food has been identified so far. GM crops with new allergenic proteins are not likely able to pass the GM food pre-market safety assessment.

Talking about GM food, one of the most controversial GM foods is GM salmon which may be the first GM animal approved for food use. We will talk about GM salmon and other GM animals in the next issue.