Besides allergenicity mentioned in the previous issue, the presence of antibiotic resistance marker genes (ARMGs) in genetically modified (GM) food has also raised public concern. In this issue, we are going to discuss the safety of the use of ARMGs.

ARMGs (e.g. kanamycin* resistance gene) are commonly used for the identification of transformed cells during the development of GM crops. In the early stage of genetic engineering, it is often difficult to determine whether a plant cell has taken up the target DNA. To facilitate the identification of cells inserted with the transgene, an ARMG is linked with the gene of interest and transferred simultaneously into the plant cells. Since the ARMG confers resistance against the sinister antibiotics, cells that contain the ARMG, and hence the gene of interest, will be able to survive in a medium containing the corresponding antibiotic. GM plants carrying the gene of interest can then be regenerated from the transformed cells (Figure 1). Although ARMGs do not serve any purpose once a transgenic plant has been developed, they remain part of the plant. 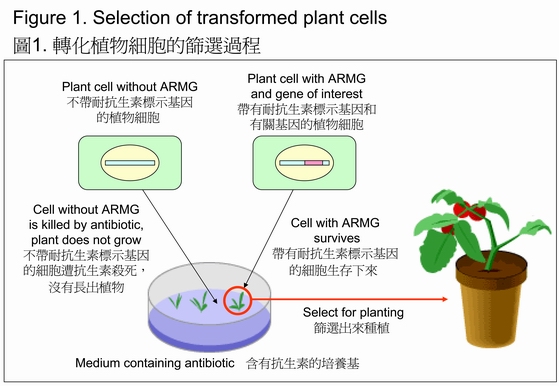 Concerns and Safety of the Presence of ARMG in GM Crops

The presence of ARMGs in GM crops has aroused concerns that bacteria in human guts might become antibiotic resistant through the uptake of ARMGs from the DNA spilling out of the ingested GM plants. Such gene transfer may compromise the effectiveness of antibiotics and pose risk to human health when the ARMG is taken up by pathogenic microorganisms.

While it remains a theoretical risk, the World Health Organization and the Codex Alimentarius Commission have pointed out that the potential for the transfer of ARMGs from plants to microorganisms in human guts is very low given the complexity of steps required for the ARMGs to transfer and stably express. Recent human studies have also demonstrated that no GM material is able to survive the passage through the whole digestive tract and that the likelihood of functioning DNA being taken up by microorganisms in human gut is extremely low.

Safety of ARMGs commonly used in GM plant has been reviewed by a number of national and international food safety authorities. Up till now, there is no evidence that ARMGs currently in use pose a health risk to humans.

For GM crops containing ARMGs, like any newly developed GM plants, their safety have to be evaluated before market approval. Factors like the safety of the ARMG product and the clinical importance of the antibiotic in question will be considered. If evaluation of the data suggests that the presence of the ARMG or gene product presents risks to human health, the marker gene or gene product should not be present in the food.

As a precautionary measure, use of transformation technologies that do not result in ARMGs in GM plants is encouraged. These include the removal of ARMGs after successful gene transfer and the use of alternative markers genes (e.g. herbicide tolerance gene) to replace ARMGs.

Despite concerns over the potential allergenicity and presence of ARMGs in food derived from genetic engineering, GM food available in the international market has undergone safety assessment and is safe for human consumption.

* Kanamycin has been used in treatment of tuberculosis and certain sexually transmitted diseases.