Boric Acid and Borax in Food

The Centre for Food Safety (CFS) has recently released the results of food surveillance on Hong Kong-style desserts. Results showed that a root starch jelly sample and three desserts containing root starch jelly were found to contain boric acid, a non-permitted preservative, at levels ranging from 830 to 11 000 mg/kg. This article provides more food safety information on boric acid and borax in food. 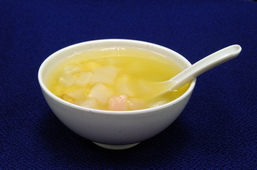 What are Boric Acid and Borax?

Boric acid and borax occur naturally in water and soil. They can be used in a wide range of consumer products, including preservatives, glass, fire retardants and pesticides etc.

Boric Acid and Borax in Food

For the general population, the greatest boron exposure comes from the oral intake of food, mainly fruits and vegetables. The World Health Organization (WHO) has estimated the average daily intake of the population is about 1.2 mg boron from diet, which falls well within the safe range of population mean intakes for adults (1.0-13 mg boron/day) suggested by the WHO.

Boric acid and borax have long been used as additive in various foods. Since boric acid and borax are effective against yeasts, and to a much lesser extent, against moulds and bacteria, they can be used to preserve food products. In addition, both of these additives can be used to increase the elasticity and crispiness of foods as well as prevent shrimps from darkening.

In 1961, the Joint FAO/WHO Expert Committee on Food Additives (JECFA) concluded that boric acid and borax were not suitable for use as food additive. However, they are still permitted to be used in caviar in the European Union.

At low concentrations, borax can be converted to boric acid in body prior to absorption.

In humans, it is believed that adverse reactions associated with low doses of boric acid per day are unlikely to occur. However, exposure to large amounts of boric acid over a short period of time can affect the stomach, bowels, liver, kidney, and brain, and may even lead to death.

Animal studies indicated that excessive ingestion of boric acid over a prolonged period of time may cause adverse developmental and reproductive effects. Testicular lesions and impaired fertility have been observed in experimental animals given boric acid in the diet. However, there is no evidence that boric acid is toxic to the genes or carcinogenic.

The WHO has established a Tolerable Daily Intake (TDI) of 0.16 mg boron/kg bw during the development of the guidelines for drinking water.

In recent years, boric acid has been detected in fresh pork, fish balls, rice dumplings and Chinese dim sums including shrimp dumplings etc. From 1 January 2007 to 30 June 2009, the CFS tested some 2 670 food samples for boric acid, in which six were found to have used boric acid illegally.

CFS Risk in Brief on "Use of Boric Acid and Borax in Food".