What is your perception of genetically modified (GM) food? Is it corn cob with kernels of different colours? Is it super sweet corn? Is it cube-shaped watermelon? Some people may think that any food with unusual or special appearance is GM food and some even call it "Frankenfood". In the coming issues, we will talk about GM food and safety issues surrounding GM food. To begin with, what is GM food?

Simply speaking, GM food is any food that is or is derived from a GM organism, including plants, animals or microorganisms, in which the genes of the organism are modified in the laboratory. The modification which aims to introduce desirable characteristics to the organism can either be done by alteration of existing genes or insertion of new genes. One example is the introduction of the gene encoding the Bt protein into plants to make them resistant to insects. Bt protein is a natural pesticide produced by the bacterium Bacillus thuringiensis. In the modification process, the gene encoding the Bt protein is isolated from the bacterium and combined with other genetic elements. The combined products are then transferred into plants cells. This can be achieved by using a gene gun that fires gold particle through the plant cell wall, or with the aid of the bacterium Agrobacterium tumefaciens which help taking in the combined products when it infects the plant cells. The plant cells carrying the target gene will subsequently be grown into plants with the desirable characteristic. In this example, the characteristic is insect resistance due to the expression of Bt protein. The technology of the modification process is called "genetic engineering" or "modern biotechnology".

Some foods may be misunderstood as GM food (see Table) due to their appearance or taste. In fact, most GM food cannot be differentiated from its conventional counterpart through physical appearance or taste. GM food, or its source organism, must have its genes altered in a way that does not occur naturally as previously discussed. The characteristics of the foods in the table are not a result of genetic modification. 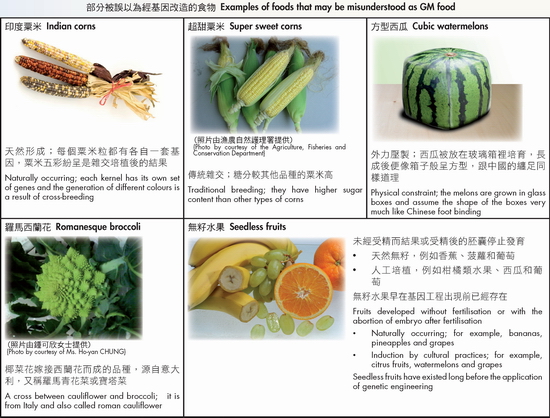 Instead of creating "Frankenfood", GM food is created for a specific aim and mostly for economic benefit such as higher crop yield. That is why some GM crops are able to gain significant market shares nowadays. In the next issue, we will talk about GM foods available internationally and their potential benefits and harm.