In light of human cases infected with avian influenza A(H7N9) virus in Mainland China and Taiwan since March, coupled with subsequent detection of the virus in commercial poultry including pigeons, chickens and ducks, and a wild pigeon, there are concerns over the imminent risk of local transmission of avian influenza from poultry and their products to humans. As of 14 May 2013, there are 131 human cases reported in the Mainland and Taiwan. This article aims to look at food safety issues associated with avian influenza A(H7N9) virus.

What is Avian Influenza A(H7N9) Virus?

Generally, H7 subtypes are found to be low pathogenic which cause mild or no disease in domestic poultry and are therefore difficult to detect in poultry. In contrast, the previous "bird flu" of H5N1 strains are highly pathogenic avian influenza virus that cause severe disease and high mortality in chickens.

Thus far, most patients identified with this infection have had severe pneumonia. Symptoms include fever, cough and shortness of breath. It is still unclear concerning both the source of infection and the mode of transmission of the virus, though a number of the human H7N9 cases in Mainland China have been reported to have contact with domestic poultry or the environments where they are housed. According to the National Health and Family Planning Commission (NHFPC), the avian influenza A(H7N9) virus is of avian origin and people are mainly infected through exposure to infected poultry or its contaminated environment. Contact with infected poultry and visiting wet markets with live poultry are important risk factors of human infection caused by the avian influenza A(H7N9) virus.

Is It Safe to Eat Poultry and Poultry Products?

Thorough cooking of poultry meat and eggs with centre temperature reaching at least 70oC can inactivate the virus. The World Health Organization therefore advises that it is safe to eat properly prepared and cooked meat, including poultry and game birds. It is important to wash hands thoroughly with soap or liquid cleanser after handling live poultry, poultry products and eggs. All the working surfaces, utensils and equipment that have been used for handling the above should also be cleaned thoroughly.

Actions Taken by the Centre for Food Safety (CFS)

Live, chilled and frozen poultry imported from the Mainland for consumption are sourced from poultry farms that are under the supervision of the Mainland authority. The imported poultry have to be accompanied with health certificates issued by competent authority in the Mainland, declaring that the animals are free of avian influenza.

From 11 April 2013 onwards, the CFS has started testing imported poultry at Man Kam To border against H7 virus, in addition to the existing measure to test against H5. Only the poultry with satisfactory test results would be released for sale at the wholesale markets. These surveillance programmes are considered sufficient in detecting avian influenza A(H7N9) virus despite its low prevalence in poultry. 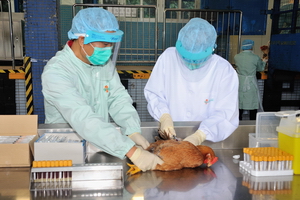 There are no human cases detected in Hong Kong to date but members of the public are advised to remain vigilant by maintaining good personal hygiene practice. Further information can be found at the Centre for Health Protection website.