Do Not Pick and Eat Wild Mushrooms

Last month, three persons suffered from food poisoning after eating wild mushrooms picked from country parks. They developed symptoms of vomiting, diarrhoea, abdominal pain and later liver damage. One of them required liver transplant. The incriminated species identified by expert in mycology was Amanita farinosa, a poisonous mushroom that can be found in Hong Kong during summer and autumn. The Centre for Food Safety urges the public not to pick and eat wild mushrooms from parks and country parks. 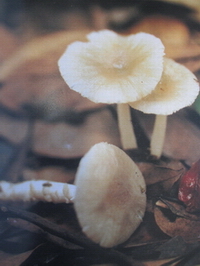 The poisonous mushroom – Amanita farinosa (Photo by courtesy of Professor Chang Shu-ting, Emeritus Professor of Biology at The Chinese University of Hong Kong )

Mushroom poisoning is caused by consumption of raw or cooked fruiting bodies of a number of poisonous species of higher fungi. The toxins involved in mushroom poisoning are produced naturally by the fungi themselves and cannot be rendered non-toxic through cooking, freezing or other means of food processing. Mushroom poisoning is usually acute and the symptoms commonly affecting the gastrointestinal system such as nausea, vomiting and abdominal pain appear shortly after ingestion. Depending on the species, patient may have other symptoms like profuse sweating, illusion, hallucination, coma and other neurological symptoms, as well as liver failure. These symptoms may occur with or without gastrointestinal symptom. Death may result in severe cases.

From time to time, sporadic cases of mushroom poisoning are reported locally. Since it is difficult for untrained individuals to distinguish between edible and inedible mushrooms, members of the public are advised not to pick and eat wild mushrooms. If suspected poisonous mushrooms are accidentally consumed, the patient should seek immediate medical attention and bring along the remnant, if available.