In the past issues of this "Nutrition and Health" series, we first introduced the concept of optimal nutrient intake , then examined energy and different types of nutrients, including protein , carbohydrates , dietary fibre , sugars , fats and cholesterol . In this last article of this series, we will talk about sodium.

Talking of sodium, another word comes to mind must be salt, to be more specific, table salt. "Does table salt equal to sodium?" Simply speaking, the answer is "yes", in particular, when public education on nutrition is concerned. However, in scientific term, the answer is "no". Generally, table salt is a chemical compound known as sodium chloride, which consists of 40% sodium and 60% chloride. In other words, for each gram of table salt, there is 0.4g (i.e. 400mg) of sodium. Many people think that table salt is the sole source of sodium in our diet. In fact, table salt is only one of the sources of sodium in our diet and its contribution to sodium intake, through the use of table salt while cooking and eating, may be much less than sodium-containing preservatives and condiments in processed and prepared foods.

Processed and prepared foods often contain food additives known as sodium nitrites and/or sodium nitrates, which are used as preservatives, antimicrobial agent and/or colour fixatives in foods, including raw and processed meats, processed fish and fish products, cheese and cheese products. Besides sodium nitrites and sodium nitrates, monosodium glutamate (MSG), soya sauce, oyster sauce, bouillon cubes and many other seasoning salts and sauces are key contributors of sodium in our diet as used in these foods are widely available and consumed nowadays.

Sodium is essential for body functions. It helps maintain the extra-cellular fluid balance and acid-base balance in the body. It is required for nerve transmission and muscle contraction.

Kidneys are responsible for regulating the amount of sodium in the body. They conserve sodium when the levels are low. On the other hand, they excrete the excess amount in urine when the levels of sodium are high in the body. There are times that the kidneys cannot excrete enough sodium and often result in sodium and fluid retention in the body, which may lead to high blood pressure (i.e. hypertension). Some individuals are more sensitive to sodium, meaning that they tend to retain sodium more easily and in turn may have higher risk of developing hypertension.

Besides hypertension, in recent years, expert reports from the World Health Organization (WHO) and the World Cancer Research Fund concluded that salt and salt-preserved foods probably increase the risk of stomach cancer.

According to the WHO's recommendation, an adult requires 2 000mg of sodium per day. This amount of sodium is approximately equal to what is found in a level teaspoon of table salt (~5g of table salt). When referring to the food pyramid, alongside fat and sugars, sodium is placed at the top of the pyramid which represents the "Eat Less" level.

To cut down on sodium intake, the first step is to eat fewer processed and prepared foods by substituting them with fresh produce and meat. Frozen produce and meat are other options as long as they are unpreserved and are not pre-seasoned. The next step is to reduce the amount of table salt and sodium-containing condiments used by replacing them with herbs and spices for seasoning purpose when preparing foods. Last but not least, it is suggested to remove the salt shaker from the dining table as most foods are tasty enough and do not need an extra dash of salt. 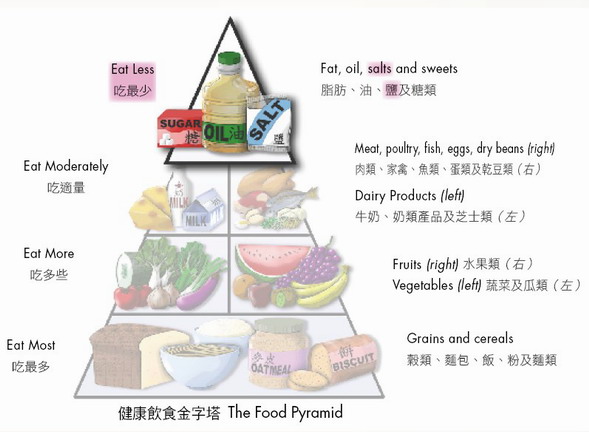