Previously, we introduced protein and carbohydrates; in this issue, we will take a look at the last macronutrient – fat, which belongs to a class of nutrients called lipid.

We often refer triglyceride as fat in our daily life. In fact, ninety-eight percent of dietary fat is in the form of triglyceride. Triglyceride has a glycerol as the backbone with three fatty acids attached. Fatty acids exist in different chemical structures. Due to the uniqueness in structures, different fats exhibit different properties and in turn have dissimilar health effects.

Functions and Intake of Fat

Fat is the concentrated source of energy (1g of fat = 9kcal). Besides, among many important bodily functions, fat is the carrier of fat-soluble vitamins (i.e. vitamin A, D, E and K) and is the structural components of cell membrane.

According to the Chinese Adequate Intake (AI), 20-30% of energy contribution should come from fats, which means that there should be about 44-67g of fat from all food sources in a 2 000-kcal diet. Referring to the food pyramid, we should "Eat Less" fats and oils (one teaspoon of oil weighs about 5g) by avoiding fatty meats and fried foods, plus selecting foods in lower fat version (e.g. a 250mL-serving of whole milk has a minimum of 8.75g of fat as compared to about 5g fat in low-fat milk with the same serving size.) 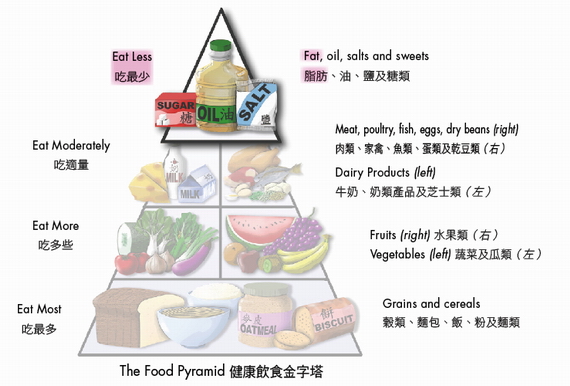 After talking about fat, next time we will examine another lipid – cholesterol.