Carbohydrate is the body's preferred energy source. According to the World Health Organization's recommendation, 55-75% of energy contribution should come from carbohydrates. Grains and cereals, plus starchy vegetables, such as potatoes and yams, are rich in starch, which provide much of the food energy for us. With reference to the food pyramid, it is the bottom level which represents the "Eat Most" level. In terms of actual amount, an adult should eat 3-6 bowls of cooked rice or noodles (one bowl of cooked rice or noodles approximately equals to two slices of bread) a day.

A simple division of dietary fibres is to group them under soluble and insoluble fibres. These two terms have widespread use and are acceptable to consumers as they have been useful in nutrition education for the understanding of the physiological properties of dietary fibres. Generally, soluble fibres have effects on glucose and lipid absorption from the small intestine thereby can help to control diabetes and prevent high blood cholesterol. Insoluble fibres, on the other hand, have more pronounced effects on bowel habit as they are slowly and incompletely fermented by microorganisms in the large intestine. Regarding food sources, fruits, oats, barley and legumes have plenty of soluble fibres, whereas vegetables, wheat and cereals have more insoluble fibres.

Positive health effects of dietary fibre are well recognised, it can help to prevent numerous chronic diseases, such as cancers and heart diseases. With reference to the Chinese Adequate Intake (AI), an adult should consume 12.6g of dietary fibre for each 1 000-kcal intake a day. In other words, a 2 000-kcal diet should have about 25g of dietary fibre. Conveying the message by using the Food Pyramid, fruits and vegetables are the main sources of dietary fibre and we should "Eat More" of these foods. A balanced and healthy diet should include a minimum of 2 servings of fruits and 3 servings of cooked vegetables (equivalent to 6-8 taels) daily. Taking the opportunity to maximise dietary fibre intake, individuals can select whole grain products whenever available.

Illustration: A Serving of Fruits 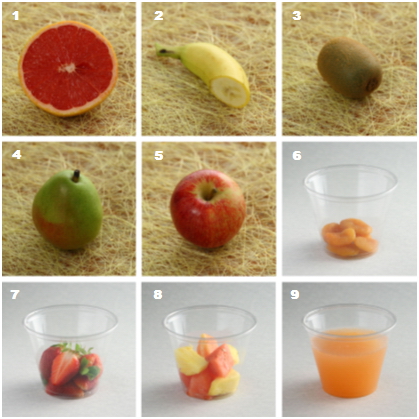 After starch and dietary fibre, we will examine another group of carbohydrates – sugars the sweets, in the Valentine's month. 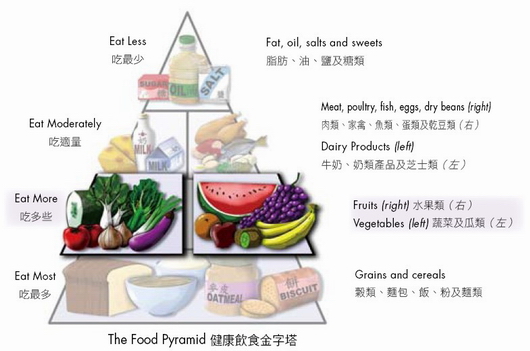