Cardiovascular diseases (CVDs), such as heart disease and stroke, are among the leading causes of death globally. Hong Kong, where heart disease was the third leading cause that claimed lives in 2019, is not spared. The World Heart Day is celebrated every year on 29 September and it highlights the actions one can take to prevent and control CVDs. Hong Kong people will have more protection against CVDs as Hong Kong is going to ban on partially hydrogenated oils (PHOs), the main culprit of industrially-produced trans fatty acids (IP-TFAs), in foods. Now let us go through some local initiatives that lay the groundwork for banning PHOs to better safeguard our heart health.

IP-TFAs are the fats most hazardous for heart health, increasing the ‘bad’ cholesterol and driving away the ‘good’ cholesterol in blood. In 2018, the World Health Organization (WHO) regarded IP-TFAs as man-made harmful compounds found in foods. It also called for concerted efforts in eliminating IP-TFAs from the global food supply by 2023.

In the same year, the Hong Kong Government also issued the 'Towards 2025: Strategy and Action Plan to Prevent and Control Non-communicable Disease in Hong Kong' (SAP) as the roadmap to protect overall heart health. The SAP spells out the local adoption of territory-wide policies to limit saturated fatty acids (SFAs) and eliminate PHOs in the food supply. To reach this goal, the Centre for Food Safety (CFS) has taken on one of the best-practice policies in the WHO's REPLACE Action Package, eliminating IP-TFAs at source by regarding PHOs as harmful substances.

On 14 July 2021, the Legislative Council passed the Harmful Substances in Food (Amendment) Regulation 2021 (the Amendment Regulation) in prohibiting the import and sale of any foods, fats and oils that contain PHOs, which will come into force on 1 December 2023. Many traders have already taken actions to source non-PHO ingredients and replace PHO-containing ones with healthier oils or fats recommended by the WHO.

Since 2007, the CFS has stepped up educational efforts in parallel to inform the public of the health risks related to TFAs. The CFS has conducted a number of studies to monitor the TFA contents in different foods. The results have been translated into education and publicity messages as well as trade guidelines on reducing TFAs and replacing IP-TFAs issued in 2008 and 2020 respectively.

Along with implementation of legislative actions, the CFS has been deploying a multi-pronged approach by implementing other WHO’s recommended measures to restrict the amount of TFAs in foods. For example, the Nutrition Labelling Scheme implemented in July 2010 has mandated the TFA contents of prepackaged foods to appear on the nutrition labels. As for infants, a TFA limit of less than 3% of the total fat in infant formula was enforced in December 2015.

The Amendment Regulation will take a step further in reducing the risk of developing heart diseases among Hong Kong people. It can protect Hong Kong people against the adverse health effects of PHOs, with concerted efforts of the government, the trade and the public. 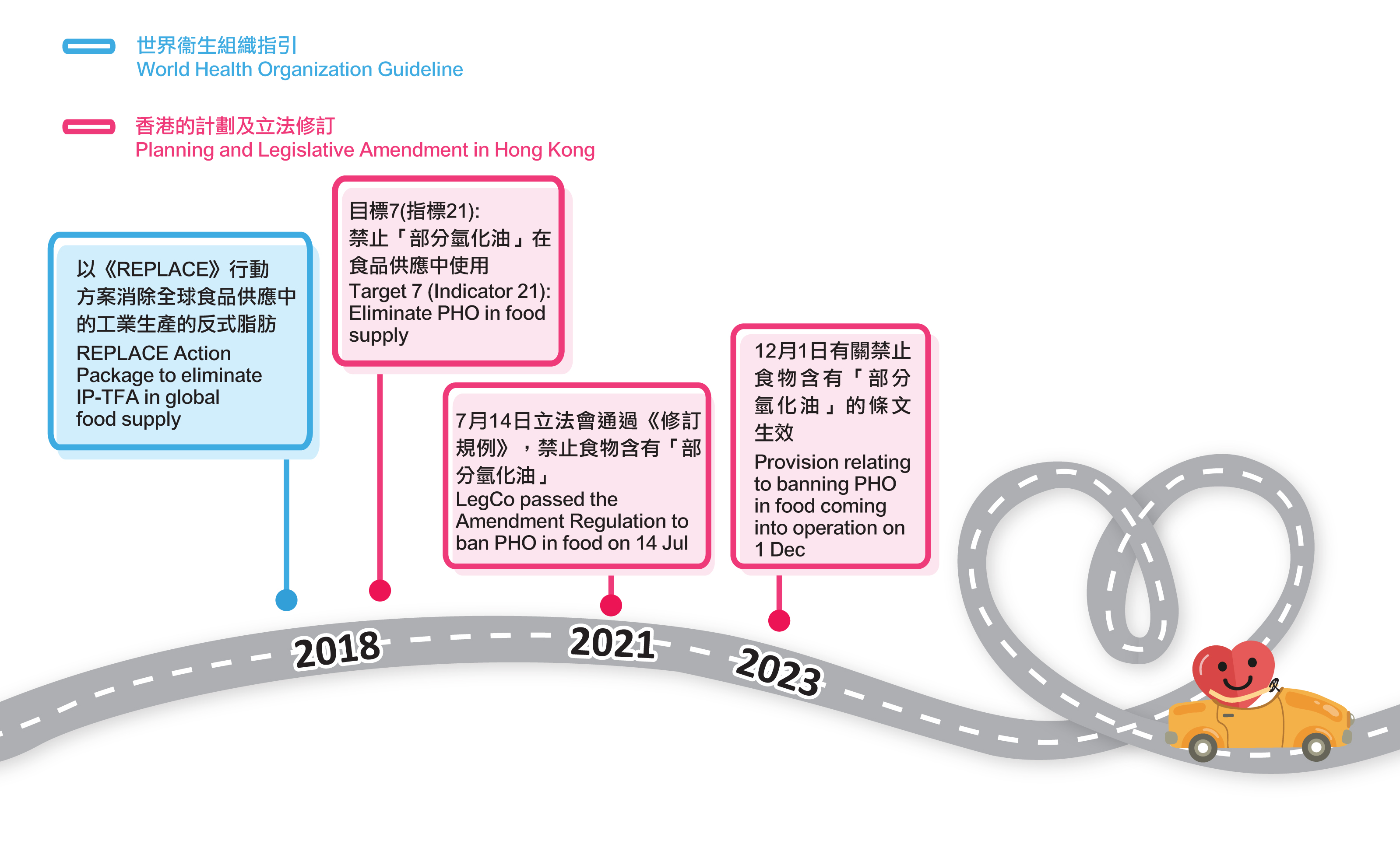