Trans fats (TFAs), a double jeopardy to heart health by increasing “bad” cholesterol and decreasing “good” cholesterol in blood, attribute to more than a half million deaths from heart disease every year around the world. Calling for concerted actions from governments and food industry, the World Health Organization (WHO) aims to eliminate industrially-produced trans fats (IP-TFAs).

Why Does the WHO Target IP-TFAs?

TFAs are not required in our everyday diet.  The WHO recommends less than 1% of energy intake from consuming TFAs, regardless of their origin either from industrially-produced (e.g. partially hydrogenated oils (PHOs) used in fried/baked food, margarine and shortening) or from ruminant sources (i.e. in meat and dairy products of cattle, sheep, etc.).  This equates to a maximum of 2.2 grams TFAs daily for a person requiring 2000 kilocalories/day.

Although the adverse health effects of ruminant TFAs or IP-TFAs appear to be similar, the WHO targets to replace IP-TFAs.  This is because IP-TFAs can be avoided and fully replaced, whereas ruminant TFAs are naturally present.  In general, IP-TFAs are the predominant source of dietary TFAs. 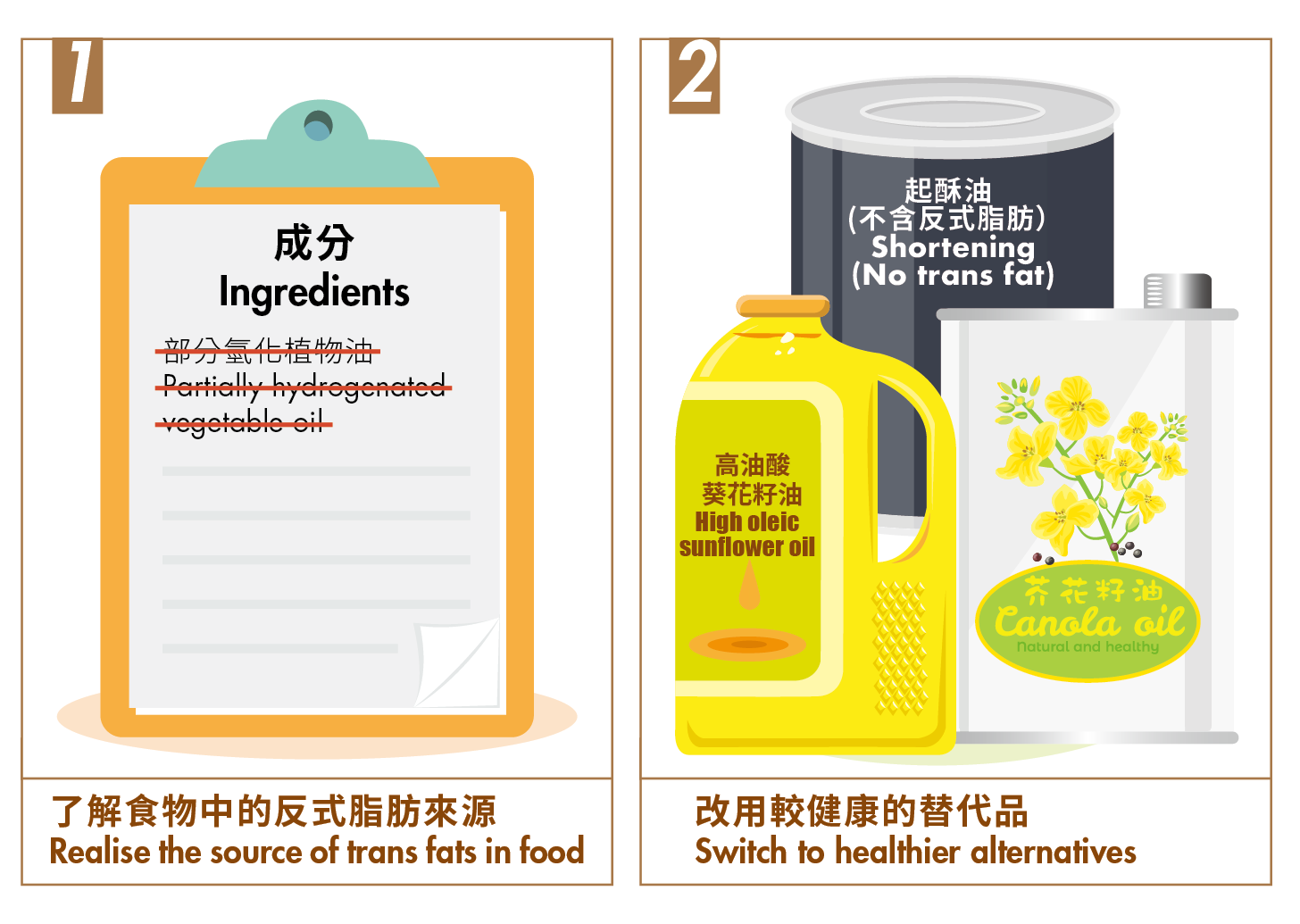 What is the Best-practice Policy to Eliminate IP-TFAs in Global Food Supply?

According to the WHO, the most effective way to eliminate IP-TFAs is to implement legislative or regulatory actions to strictly prohibit or limit their use in any food.  Eliminating IP-TFAs using a voluntary or mandatory approach is happening in many places (see the WHO’s TFA Country Score Card).  Experiences in some countries showed that voluntary measures could lead to reductions in TFAs while in some others mandatory elimination was found to be more effective.

The WHO lists two approaches of best-practice policy: (i) limiting IP-TFAs to no more than 2 grams/100 grams of total fat in all foods; and (ii) prohibiting PHOs by reclassifying them as harmful substances.  The WHO states that both approaches have advantages and limitations.  Government bodies may consider the local situation such as existing regulatory practices, laboratory capacity and the nature of local food industry to decide which approach to adopt.

PHOs, the source of IP-TFAs, were first introduced into food supply in the early 20th century as an economical replacement for butter, lard and high-valued vegetable fats such as cocoa butter.

Following the WHO’s call for action, some stakeholders in the food industry, such as the International Food and Beverage Alliance, have already committed to remove IP-TFAs.  The WHO reports that many have successfully replaced TFAs with healthier alternatives without incurring any business loss. More importantly, this reformulation does not lead to a change in taste or consumers’ satisfaction.  Local traders may adopt some basic steps to reduce IP-TFAs in their products (see Figure 2).

Over the last decade, the Centre for Food Safety (CFS) has been working closely with the trade to reduce TFAs in the food supply.  In 2007, the first study on TFAs in local food was conducted.  The findings identified very high TFA levels in some popular pastries and deep fried foods, arousing awareness of the community on TFAs.  In 2008, the CFS produced Trade Guidelines to facilitate the trade to reduce TFAs.  In 2010, the Nutrition Labelling Scheme mandated TFAs to be declared for prepackaged foods, which served to provide information to consumers and lead industry to reformulate products.

The conjoint efforts between the Government and the trade appear to reap some fruits: a decreasing trend in TFAs and prepackaged products with low or no TFAs blooming on the local market as revealed by follow up studies.  However, the recent 2019 study found certain non-prepackaged foods, especially those high-fat products like cream soup with puff pastry and chicken pies, still contain relatively high levels of IP-TFAs.  For further reducing IP-TFAs in local food to protect our heart health, additional measure may need to be considered.