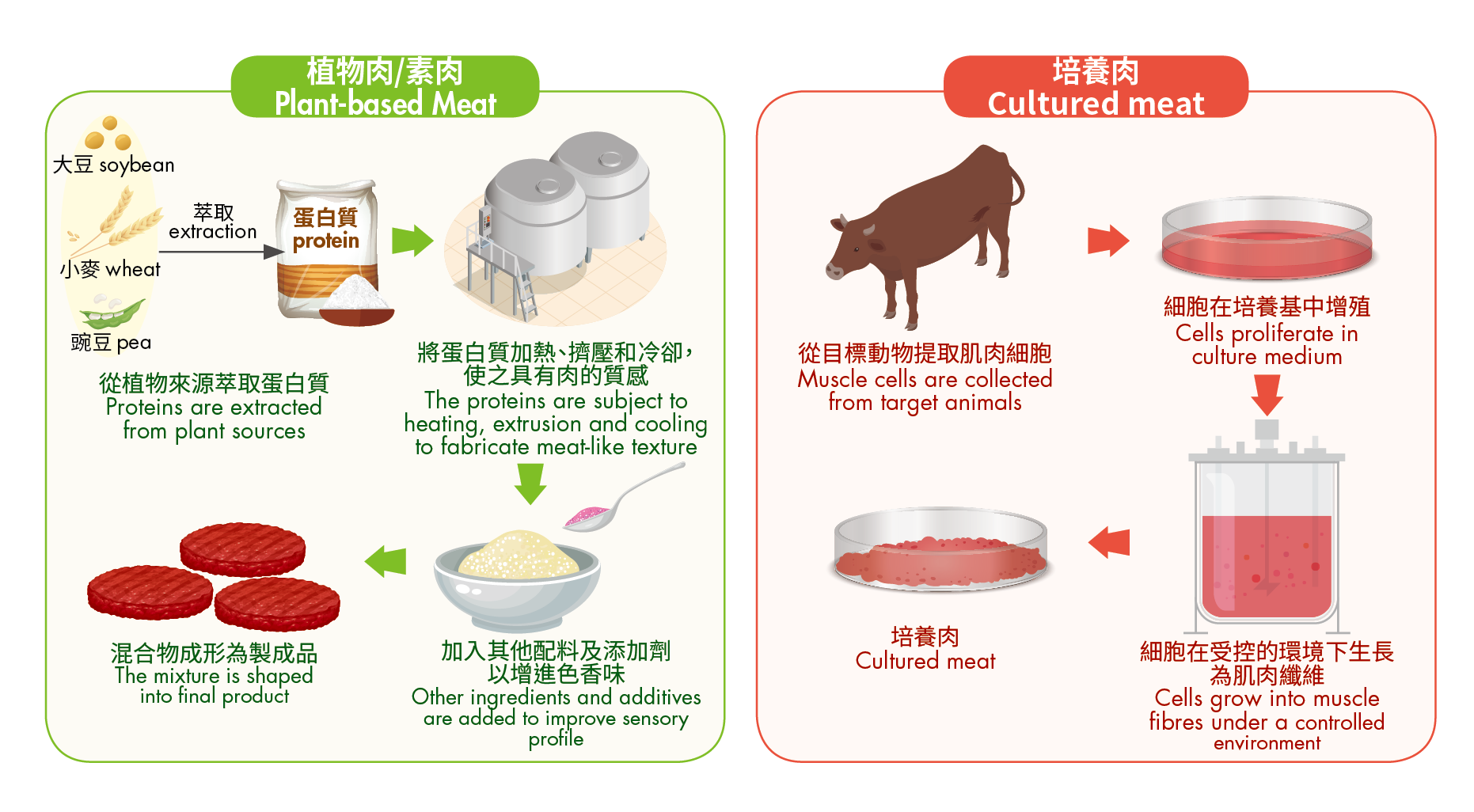 Though it might not sound familiar to some, plant-based meat alternatives are not anything new.  Rooted in the Chinese cuisine, vegetarian chicken (made from bean curd sheet) and vegetarian lo mei (made from wheat gluten) are examples of plant-based meat alternatives that have long been part of the local diet.  Basically, plant-based meat are meat analogues made from plant protein.  They are produced by initially extracting proteins from plant sources such as soya bean, wheat or pea.  The protein extracts are then subject to heating, extrusion and cooling to fabricate meat-like texture, eventually added with other ingredients and additives (e.g. flavouring and colourants) to mimic the flavour, taste and appearance of meat.

Recently, plant-based meat products, in forms of chicken nugget, burger patty and deli slices, are made increasingly available in restaurants and grocery stores overseas.  Newer plant-based meat alternatives on the market today are meant to taste and look more like meat.  This is achieved for example by adding beet juice to imitate blood or coconut oil to simulate meat fat and help it sizzle on the grill.  Though some believe that meat free alternatives are healthier options, plant-based meat products are often added with different sodium-containing condiments and additives to maintain their texture and flavour which contribute to the relatively high levels of sodium in these products.

In addition to plant-based meat, cultured meat is another on-the-horizon alternative to conventional meat.  Cultured meat, also referred to as lab-grown meat and in vitro meat, etc, is meat grown in laboratories from animal cells.  To produce cultured meat, muscle cells are first collected from target animals and allowed to proliferate in a culture medium.  These cells are then grown into muscle fibres under a controlled environment.  Nutrients that are not synthesised by muscle cells such as iron and vitamin B12 are supplemented in the culture medium in order to produce cultured meat products with a nutritional value comparable to that of conventional meat.

At present, cultured meat products are not yet commercially available.  This is because the current production technology is time-consuming, highly labour-intensive and costly that makes large-scale production of cultured meat not economically viable.  In addition, cultured meat is only suitable for making processed or comminuted meat products such as burger patty or sausage as meat only grows into small pieces (less than a cubic centimetre in volume) through cell culture.  Cultured meat is also different from conventional meat in taste, colour, appearance and texture.  Further modifications are needed to refine the production methods in order to lower cost, improve scalability and replicate the complex textures of different meats before marketing.