This article, being the last in the series on setting standards for metallic contaminants in food, will focus on aquatic animals. Metals such as mercury, arsenic and cadmium occur naturally in the earth crust. They can be released to the aquatic environment through various natural processes or human activities and then taken up by aquatic animals (see Figure 2). 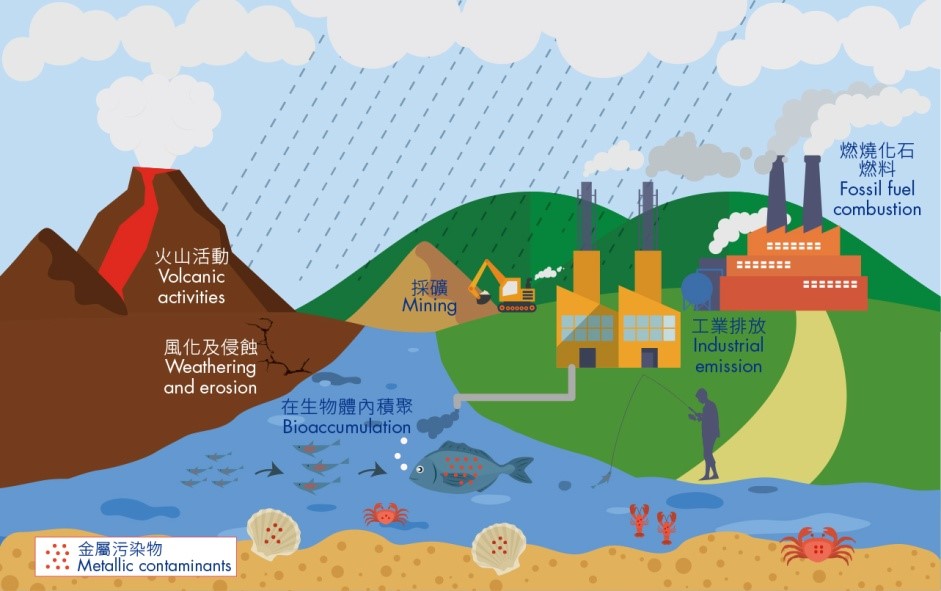 Setting Standards for Mercury in Fish

Mercury exists in the environment in various forms: elemental (metallic), inorganic and organic mercury. Inorganic mercury dissolved in fresh water or sea water can be converted by microorganisms to organic mercury which is then taken up by aquatic animals. Methylmercury is the most concerned form of organic mercury as it is more harmful to human health than the elemental and inorganic forms of mercury. The primary health effect of methylmercury for foetuses, infants and children is impaired neurological development. Methylmercury exposure in the womb, which can result from a mother's diet, can adversely affect a baby's growing brain and nervous system. Fish is the major dietary source of methylmercury, which generally contributes more than 90% of the total mercury content in most fish.

Currently, the Codex Alimentarius Commission (Codex) has established guideline levels (GLs) for methylmercury in fish (other than predatory fish) and predatory fish at 0.5 mg/kg and 1 mg/kg, respectively. A Codex GL is the maximum level(ML) of a substance in a food or feed commodity which is recommended by the Codex to be acceptable for commodities moving in international trade.

Apart from the Codex GL, local situation has also been considered in the recent review of the local standards for metallic contamination in food. The first Hong Kong Total Diet Study revealed that about 11% of women of childbearing age (aged 20-49) had dietary exposure to methylmercury exceeded the relevant health based guidance value in the local setting. Taking into account the potential health risks to the foetus upon methylmercury exposure during pregnancy, an ML of 0.5 mg/kg for methylmercury in fish (including predatory fish) is proposed. This proposed ML is more stringent than the Codex GL of 1 mg/kg for methylmercury in predatory fish, so as to strike a balance between adequate public health protection and having minimal impact on the supply of fish to Hong Kong.

Setting Standards for Arsenic and Cadmium in Aquatic Animals

Arsenic and cadmium released to the aquatic environment can be taken up by aquatic animals and accumulate in the food chain. In the recent review of the local standards for metallic contamination in food, the “as low as reasonably achievable” (ALARA) principle of Codex has been taken into consideration for the proposed MLs for metallic contaminants including arsenic and cadmium in aquatic animals.

Food safety is a shared responsibility which involves proactive tripartite collaboration of the Government, the food trade and consumers. Apart from the Government’s routine monitoring of metallic contamination in food through the Food Surveillance Programme and review on the relevant local standards, the food trade also plays a vital role in food safety to ensure compliance with the requirements of relevant laws and regulations and source foods that are safe for consumption. Consumers could protect themselves by purchasing food from reliable retailers and avoiding the consumption of high risk food. They should also maintain a balanced and varied diet to avoid excessive exposure to metallic contaminants from a small range of food items.