The following article, being the fourth in this series on "Metallic Contaminants in Food", will focus on arsenic – its various forms, how we are exposed and what can be done to minimise our exposure to arsenic.

Arsenic is an element that is commonly found in nature. Arsenic exists in organic, inorganic arsenic (III) and arsenic (V) forms. In nature, arsenic is often present in igneous and sedimentary rock as inorganic arsenic compounds. These arsenic compounds may end up in soil, air, water or become airborne. The inorganic forms are usually considered more toxic to human, whereas the organic forms are of much less concern in toxicity.

How Does Arsenic End Up in Food? How are People Exposed?

Generally, people are exposed to arsenic through eating. In areas where water is naturally high in arsenic, drinking water is also a significant contributor to the dietary intake. However, this is not of local concern as the maximum level of arsenic in potable water in Hong Kong is less than 0.001 mg/l between October 2006 and September 2007. This is well below the 2004 World Health Organization's provisional guideline value of 0.01 mg/l arsenic in drinking water. Furthermore, absorption of arsenic through air and skin only plays a minor role in the general population.

As arsenic compounds are mostly soluble in water, arsenic is more likely to be present in seafood, especially shellfish. According to literature, the level of arsenic can range from 1 to 10 mg/kg in fishes and up to 100 mg/kg in bottom feeders and shellfish. The use of arsenic-containing agricultural chemicals can lead to accumulation of arsenic in soil and plants, but this only contributes to trace amount of arsenic in food. On the other hand, arsenic present in fish is more often in the less toxic organic form. According to the CFS Risk Assessment Study on the Dietary Exposure to Heavy Metals in Secondary School Students in 2002, the dietary exposure of inorganic arsenic is 2.52 and 6.77 μg/kg body weight/week for average eaters and high consumers respectively. These are lower than the safety level of 15μg/kg body weight/week, even though a conservative assumption that 10% of total arsenic detected is in inorganic form in all food is made. Our own data suggests that the proportion of total arsenic in seafood that is inorganic ranged from 0.2% to 6.0% locally. This level of dietary arsenic exposure is unlikely to cause health problems.

Illustration: Shellfish is a major source of dietary arsenic exposure in Hong Kong 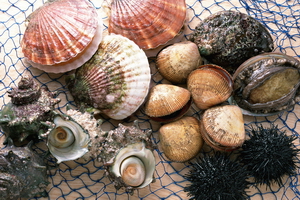 What are the Effects of Arsenic on Health?

Even though pishuang may sound frightening to many Chinese, its toxicity is determined by the dose ingested. Acute poisoning due to arsenic present in food is rare. Symptoms of acute arsenic poisoning include severe vomiting and diarrhoea, accompanied by muscular cramps, facial oedema and cardiac dysfunction. It had been reported that an oral dose of 2 to 21g of arsenic was fatal, while others reported non-fatal outcome when 1 to 16g arsenic was ingested. Chronic exposure to inorganic arsenic via drinking water may cause peripheral vascular disease. The relationship of arsenic exposure and other diseases are less clear, but there is evidence for cardiovascular diseases and hypertension.

The International Agency on Research on Cancer (IARC) considered that arsenic in drinking water can cause cancer of the urinary bladder, lung and skin. IARC also consider arsenic and arsenic compounds as a whole are carcinogenic to humans, as occupational exposure to inorganic arsenic, mainly by inhalation, in mining and copper smelting increases the incidents of lung, gastrointestinal and renal cancer.

Obtain food supplies from reliable sources and not to obtain shellfish and other seafood from contaminated areas.