The Centre for Food Safety (CFS) conducted a targeted food surveillance project to assess the use of sulphur dioxide in fresh and frozen meat which is prohibited under current regulations. A total of 321 samples of meat (including 190 pork, 118 beef and 13 mutton samples) from various market stalls and fresh provision shops were collected for testing of the presence of sulphur dioxide. The results revealed that 15 samples (4.7%) (including three pork, 11 beef, and one mutton samples) contained sulphur dioxide at levels between 23 ppm and 3 300 ppm.

Why is Sulphur Dioxide Added to Meat?

The colour of raw meat is determined by the oxygen-carrying muscle pigment known as myoglobin which predominates on the surface of meat. Various states of myoglobin (deoxymyoglobin, oxymyoglobin and metmyoglobin) displaying different colours are shown in Fig. 1. 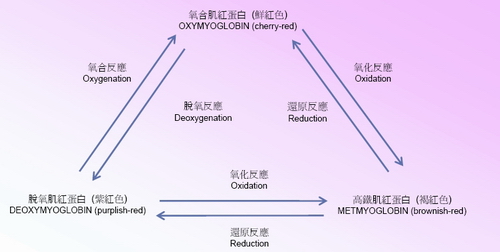 Illustration: Changes in colour of vacuum packed chilled beef (previously frozen) in room temperature after the packaging is removed. Left: Just removed from packaging. Middle: After half an hour. Right: After 27 hours. 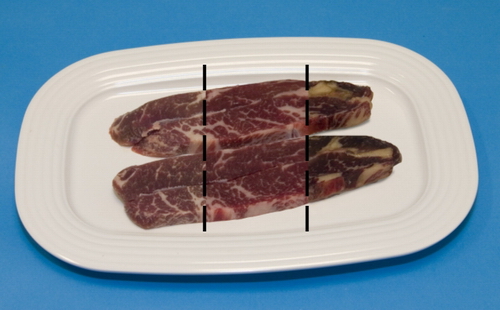 Deoxymyoglobin is purplish-red and contributes to the interior colour of freshly cut meat. If the raw cut meat is exposed to air for 20 to 30 minutes, the deoxymyoglobin will oxygenate to form cherry-red oxymyoglobin which is the typical colour of fresh meat sold in market stalls and fresh provision shops. However, as display time increases, oxymyoglobin oxidises to metmyoglobin and the portion of meat with brownish discolouration will increase.

Meat colour is an important sensory characteristic by which consumers make judgments of meat quality. Cuts of meat with brownish-red colour will be regarded as not fresh and undesirable for consumption. In order to display meat with attractive colour, individual traders have been found to add sulphur dioxide to meat illegally to quench the oxidative process. As a consequence, the desirable fresh meat colour (purplish-red or cherry-red) can be retained even though it is exposed to air for an extended period of time.

What is Sulphur Dioxide?

Sulphur dioxide is a commonly used preservative in a variety of foods including dried fruits, pickled vegetables and sausages. In addition to its anti-microbial and anti-browning functions, sulphur dioxide can delay discolouration in meat, fruits and vegetable caused by oxidation.

What are the Health Concerns Regarding Sulphur Dioxide in Meat?

Sulphur dioxide is a food additive of low toxicity. It is also water soluble and most of it tends to be removed through washing and cooking. Upon normal consumption, it should pose no adverse health effects on humans. However, for susceptible individuals who are hypersensitive to sulphur dioxide, allergic symptoms including shortness of breath, headache and nausea may be experienced.

Are Alternative Methods Available to Keep the Colour of Fresh Meat?

Preservatives are not allowed to be added to fresh meat. However, retention of colour of fresh meat can be accomplished by suitable packaging methods as well as proper storage and handling of meat.

Vacuum packaging of fresh meat can retain the purplish-red colour of deoxymyoglobin which can be reoxygenated quickly to bright red oxymyoglobin once the package is removed.

In fact, the rate of metmyoglobin formation depends on multiple factors including display temperature and bacterial load. Storage and display of meat under refrigeration and hygienic preparation of meat cuts both help to retain desirable meat colour.

How is the Use of Sulphur Dioxide in Meat Monitored in Hong Kong ? 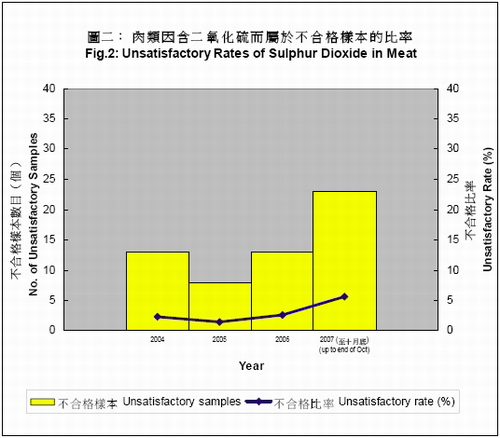 Further information about preservatives can be obtained from the following web pages: