Last month, two clusters of food poisoning involving 49 persons who had dined in Happy Valley were reported to the Centre for Food Safety. The predominant symptoms among the victims were vomiting and diarrhoea which appeared about 40 hours after the meal. Findings of epidemiological investigation suggested that the food poisoning was caused by consumption of norovirus contaminated raw oysters.

As oysters feed by filtering large volumes of seawater from their surrounding environment, viruses, bacteria and heavy metals can accumulate in oysters. 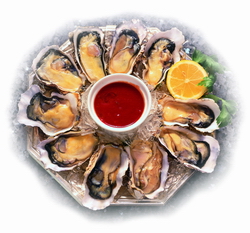 Among the different disease-causing viruses found in oysters, norovirus in oysters is well-known to cause foodborne disease outbreaks worldwide, making raw oysters a high risk food item. Besides being foodborne, the virus can also be spread from person to person and from contaminated surroundings, both of which are important routes of infection. Norovirus infection is more common in winter months, and thus it is sometimes called the "winter vomiting disease".

Norovirus affects people of all ages and only a few viral particles are required to cause disease. However, it is more common among the elderly and children under five years of age. Typically, symptoms of vomiting, nausea, abdominal cramps and diarrhoea develop 24 to 48 hours after the ingestion of contaminated food or water while headache and fever may also occur. Although vomiting can be severe and debilitating, symptoms generally last for one to two days and the illness is usually self-limiting with no long term complication.

Vibrio bacteria are often implicated in contaminated seafood, including oysters. There are different kinds of Vibrio. They like to live in warm coastal sea water. Vibrio parahaemolyticus is the commonest type of Vibrio which causes food poisoning. Symptoms of affected persons include diarrhoea, abdominal cramps, fever, nausea and vomiting.

Oysters can also be contaminated by heavy metals like cadmium and lead. Acute toxicity resulting from consumption of contaminated food is uncommon but chronic exposure can result in undesirable toxic effects. Toxicity from heavy metals depends on the type of metals and the amount taken, for example, cadmium and lead affect the kidney and neurodevelopment respectively.

For the two food poisoning outbreaks, prompt action was taken to stop the import and sale of the concerned oysters. At the same time, the World Health Organization was informed of the outbreaks through its International Food Safety Authorities Network (INFOSAN), which in turn alerted other food safety authorities at the international level.