In early November 2012, we received two clusters of suspected food poisoning from the Centre for Health Protection (CHP). The epidemiological findings showed that all the affected individuals had eaten raw oysters at buffet dinner in the same hotel in Tsim Sha Tsui. The epidemiological features including diarrhoea and vomiting about 40 hours after consumption of oysters were suggestive of food poisoning caused by norovirus. Immediate control measures were carried out. No further related cases occurred afterwards.

In this incident, there were a total of 16 clusters of food poisoning cases affecting 41 persons. This outbreak illustrates our vulnerability to norovirus infection.

Norovirus has been an important cause of foodborne infection throughout the world. The route of infection is faecal-oral via contaminated food or water. It can also spread directly through person to person or indirectly via contaminated objects or aerosols. As little as ten viral particles are sufficient to cause illness. Although alcohol based antibacterial hand gels work against many harmful bacteria, they do not protect against norovirus.

Viral particles are excreted at high levels by infected people. Some infected individuals can be prolonged shedders. The viral particles can stick onto objects and have the capacity to infect people after days or weeks. Therefore thorough handwashing is very important in preventing its spread through the faecal-oral route. The incubation period of norovirus infection is usually 24 to 48 hours. Predominant symptoms are vomiting, watery diarrhoea and nausea, while low grade fever sometimes occurs. Norovirus illness can be serious, especially for young children, elderly and people with compromised immune systems. No vaccine or specific treatment is available.

Norovirus survives freezing temperature. Compared with most bacteria, norovirus is relatively heat resistant and may remain infectious in food heated to 60°C for 30 minutes. The virus is also acid-resistant. Eating contaminated oysters with lemon juice, vinegar or alcohol does not prevent infection.

Norovirus is commonly found in sewage-contaminated waters. As other bivalves, oysters feed by filtering large amount of water through their gills; therefore they are susceptible to contamination if grown in contaminated water. Norovirus binds to oyster tissue within the gut and could concentrate up to 99 times compared to the surrounding water. It is difficult to remove norovirus from oysters through cleansing. Depuration is often ineffective. Therefore, consuming raw and partially cooked bivalves is of high risk for infection. 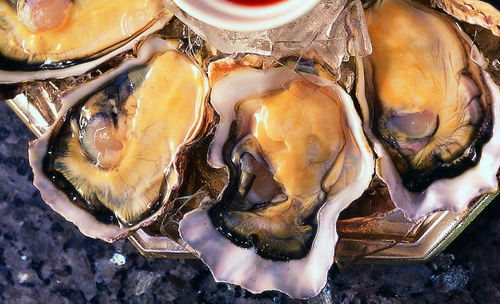 Picture taken from a buffet: Oysters may carry norovirus.

"A Tale of Two Hotels"

Upon referral from the CHP on the suspected case, field investigation was mounted immediately, which revealed that none of the related food handlers was affected and no definite vomiting incident was known in the premises. It was, therefore, not likely that the food handlers served as the source of infection. On the other hand, oyster samples taken from the hotel were tested positive for norovirus.

Further investigations conducted revealed that a food poisoning case involving a food premises at another hotel was related. Four persons presented with diarrhoea about 47 hours after eating raw oysters. Oysters collected at this food premises were also tested positive for norovirus. Swift action was therefore taken to suspend sale of all oysters of these two food premises.

We worked up the supply chain and found that the same distributor had been providing oysters of the same origin to both food premises during the period. Further investigation revealed that these oysters had been harvested from a oyster farm in England. As there was evidence that these oysters were contaminated by norovirus, the Centre for Food Safety instructed the distributor to recall oysters from the farm concerned and stop further importation. All the retailers were alerted. The British Consulate General in Hong Kong was informed about the incident.