Toxins in our Mushrooms?

This article is the last in a series of three articles on natural toxins in food.

Mushrooms have been cherished by many cultures as nature's delicacies. They provide people with food of unique aroma, flavour and texture, and at the same time provide a source of protein and other nutrients. The macroscopic mushroom, which is the reproductive spore-bearing organ of a fungus, is usually the part consumed as food.

However, there are also many wild mushrooms that contain a range of chemicals that can seriously hamper consumers' health, causing permanent damages to organs and even death. Such tragic results have been reported in many mushroom-consuming cultures from time to time, as toxic and non-toxic species of mushrooms can look similar and identifying toxic mushrooms calls for the expertise of mycologists. Folklore methods like observing the colour, reactions with silver, etc. are not reliable indicators of mushroom toxicity. Furthermore, many mushroom toxins are heat resistant and cannot be rendered non-toxic through cooking or canning. Therefore, the only way to avoid mushroom poisoning is not to collect and consume wild mushrooms. There are also many non-lethal but still toxic mushroom toxins. In fact, the majority of the wild mushrooms in Hong Kong (about 90%) are inedible or poisonous.

Amatoxins is a family of cyclic octapeptides. Amatoxins are potent toxins that are unique in staying latent in human for a period ranging from 6 to 48 hours (average 6 to 15 hours) after consumption before showing any poisoning symptoms. This symptomless latent period enables the intaken amatoxins to circulate and exert toxicities to different organs of the victim, and cause the victim to delay seeking medical attention. The symptoms initially resemble severe gut infection with abdominal pain, vomiting and watery diarrhoea. If the victims survive this stage, they may seem to recover for a short period, and followed by liver failure with loss of strength and appetite, tea colour urine and yellow skin. Death can occur from dehydration in the initial severe gut toxicity phase or more commonly from liver failure if liver transplantation cannot be arranged. Death Cap (Amanita phalloides), Guangzhou Destroying Angel (Amanita exitialis), East Asian Brown Death Cap (Amanita fuliginea) and Eastern American Floury Amanita (Amanita farinosa) are among the local wild mushroom species that contain amatoxins. There were two outbreaks of amatoxins poisoning in April 2013 after consumption of locally collected wild Amanita mushrooms, affecting three persons. All three persons suffered from serious liver damage and one of them required liver transplant.

Muscarine is a mushroom toxin that can affect the receptors in smooth muscles and sweat glands in the autonomic nervous system. It mainly causes profuse sweating in people who consume mushrooms with high levels of muscarine. Muscarine poisoning is also characterised by increased salivation, perspiration and tearing, and followed by abdominal pain, nausea, diarrhoea and difficulty breathing within 15 to 30 minutes of consuming the mushrooms. Clitocybe and Inocybe species of mushrooms, with some of them known to contain muscarine, are found wild in Hong Kong. There are a few local poisoning cases suspected to be caused by muscarine but the exact mushroom could not be identified. 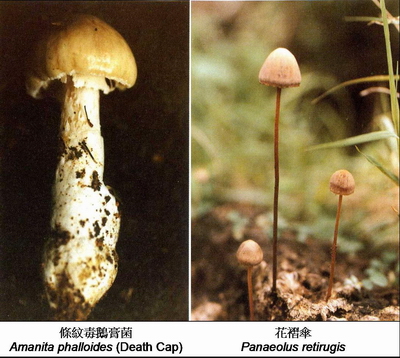 Examples of poisonous wild mushrooms that can be found in Hong Kong. Amanita phalloides contains amatoxins while Panaeolus retirugis contains psilocin. (Photo by courtesy of Professor Chang Shu-ting, Emeritus Professor of Biology at The Chinese University of Hong Kong)

By far the commonest toxin in mushroom in Hong Kong or worldwide is gut irritants. These ill-defined gastrointestinal toxins exist in a number of local mushrooms and cause more than 90% of mushroom poisoning in Hong Kong. Patients would have early onset (0.5 to 3 hours) of epigastric pain, vomiting and diarrhoea. The disease is self-limiting and responds to fluid replacement and symptomatic treatment.

There are also other mushroom toxins that cause a range of symptoms after consumption. However, there is no local case reported so far. Some mushroom toxins can cause drunk-like symptoms, illusions, hallucinations or even convulsion, others can cause renal or muscle injury, while one of them can cause symptoms only after co-ingestion of alcohol.

Do Not Self-collect and Consume Wild Mushrooms

As there is no easy way for the general public to ensure correct identification of edible wild mushrooms, the public should not collect wild mushrooms themselves for consumption. Edible, inedible and poisonous wild mushrooms can look quite similar and distinguishing mushroom species is difficult. Contamination in field collected mushrooms is common, and it is easy to have spoiled mushrooms in a collection. Consuming edible but contaminated or spoiled wild mushrooms also leads to poisoning. The consequence of consuming incorrectly identified or unsafe mushrooms can be severe and life threatening.