Must Moulds be Heinous?

Talking about moulds, their disgusting appearances such as grey patches, fuzzy green dots and white dust may instantly come up to your mind. You will probably get mad when they do their best trick to spoil your favourite food. You may also have heard of moulds forming dangerous toxins. In this article, let's take off our tinted glasses and have a closer look on these microorganisms to see if they are really heinous.

Moulds are fungi that can be found virtually in every environment. They are common in Hong Kong because our warm and humid climate is conducive to their growth; however, they can also grow at refrigerating temperatures. These microorganisms grow well on most types of food and if you notice their presence in food, it is generally a sign of spoilage.

Moulds reproduce by tiny spores which are invisible to the naked eyes and spread through air, water or other means including food handling. After landing in a suitable environment such as food, spores can germinate and grow. When the mould colony is large enough, you may see them with naked eyes. However, sometimes you may not be aware that moulds are present in your food, particularly if their colour has low contrast against that of the surrounding product. For instance, grey patches are readily visible on white bread but difficult to be seen on dark chocolate cake. Therefore, we may occasionally consume mould contaminated food which appears to be mould-free!

Most moulds are harmless and some are even desirable; in general acute toxicity resulted from the consumption of mouldy food is unlikely. Nevertheless, certain moulds can be dangerous. Some moulds can cause infection especially in patients with weakened immunity, such as patients infected with human immunodeficiency virus (HIV) or suffering from some chronic diseases (e.g. cancer), and some others can produce poisonous mycotoxins (toxins from fungi). Mycotoxins can cause acute and/or chronic health effects in humans, for example aflatoxins can cause acute liver damage and are best known for their potential in causing liver cancer.

Can Moulds be Desirable?

Some moulds are desirable. They can be used to give certain types of cheeses unique flavours and textures. For instance, the blue colour of blue veined cheeses such as Roquefort comes from a type of mould called Penicillium roqueforti added during the manufacturing process while other cheeses like Brie and Camembert contain white surface moulds. The moulds used to produce these cheeses are generally safe to eat.

In addition, some salamis, Italian salami for example, have a characteristic thin, white mould coating which is also edible.

What to do with Mouldy Food? Use or Discard?

Even moulds are not always hazardous; they generally spoil food and affect the overall quality of the product. However, the major concern of mouldy food is still on whether the moulds have mycotoxin-producing ability. In general, mycotoxin producing moulds are primarily found in grain and nut crops, but are also known to be on celery, grape juice, apples and other produce. Inspection by the naked eyes is unable to tell if the mould present in food is harmful or not.

To ensure food safety, apart from food containing moulds as part of the manufacturing process, you should discard food when you see mould on it. Simply removing visible mould from food surface cannot guarantee food safety because root of the mould may have already been invaded deeply into the food (see diagram). For some dangerous moulds, poisonous substances are often contained in and around the roots and in some cases, toxins may even have spread throughout the food. In addition, spoiled food may also have bacteria growing along with the mould. 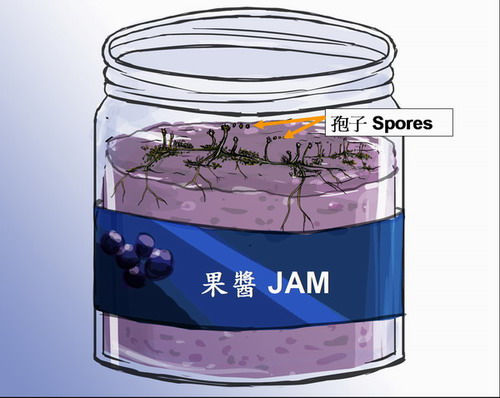 To avoid food wastage, buy small amounts of food and use them as soon as possible can prevent food from turning mouldy. It is also important to keep food covered to prevent exposure to mould spores in the air and possible cross contamination. Perishable foods and leftovers should be refrigerated and consumed as soon as possible. For other foods, they should be stored in accordance with the storage instructions provided. If storage instructions are not available, store them in a cool and dry place before consumption.