In recent months, there have been continuous reports that radioactive water are leaking from the Fukushima Nuclear Power Station. Japan's Nuclear Regulation Authority has rated the leaks of radioactive water at Tokyo Electric Power Company's Fukushima Daiichi Nuclear Power Station as level 3 "serious incident" on the International Nuclear Event Scale. There are worries about contamination of food chain by radioactive substances, especially fishery products. The main health concern for consumers in the long term is development of cancer.

This article summarises the existing measures adopted by the Centre for Food Safety (CFS) and the CFS's response to the
current situation.

On 24 March 2011, in response to the situation in Japan right after the Fukushima incident, the Director of Food and Environmental Hygiene issued an order to prohibit import and supply of all fruits, vegetables, milk, milk beverages and dried milk from fi ve prefectures of Japan, i.e. Fukushima, Ibaraki, Tochigi, Gunma and Chiba. Chilled and frozen game, meat, poultry and poultry eggs, and live, chilled and frozen aquatic products from the above prefectures were also prohibited unless accompanied by radiation certificates issued by the Japanese authority attesting that the radiation levels did not exceed the Guideline Levels for Radionuclides in Foods following Accidental Nuclear Contamination developed by the Codex Alimentarius Commission (Codex Guideline Levels). The order remains in force today 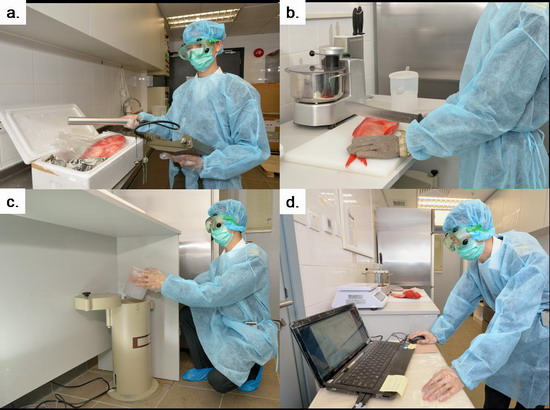 (a) Detection of radioactivity level by hand-held device. (b) - (d) Sample preparation and detection of activity of differnet radionuclides in foodstuffs with Contamination Monitoring System.

To ensure food safety, an enhanced surveillance programme was introduced in March 2011. The main radionuclides representing health risk are radioactive caesium and radioactive iodine which are being tested in the programme. Samples were collected from every consignment of food imported from Japan for examination of radiation level according to a risk-based approach. Besides, Japanese food produce taken from wholesale and retail levels are also tested to ensure that food on sale in Hong Kong is safe for consumption, making reference to Codex Guideline Levels as safety criteria.

As at 18 September 2013, over 150 000 samples had been tested by the CFS. Three samples of vegetables from Chiba taken on 23 March 2011 were found unsatisfactory. Over 19 000 fishery products, including fish, crustacean and mollusca, tested were satisfactory. A total of 48 samples (including 2 vegetables, 19 tea bags, 18 tea leaves, 7 tea powders, 1 oatmeal and 1 dried mushroom) detected with low radioactivity levels but not exceeding the Codex Guideline Levels were reported.

Based on the surveillance results in Hong Kong and surveillance by the Japanese authorities, the CFS has been adjusting the sampling ratio of different food groups from different prefectures as necessary.

Given the available information and surveillance results from Japan and local programmes, the current prohibition order and enhanced surveillance plan serve their purposes of protecting public health.

The CFS will remain vigilant and continue to monitor the latest development from international and Japanese authorities, and will take appropriate actions when necessary.