Aflatoxins are the secondary metabolites from a number of mould of the Aspergillus family, which include A. fl avus , A. parasiticus and A. nomius etc. The name "aflatoxin" itself was taken from "Aspergillus flavus toxin", when the toxin was isolated during the early days of modern mycotoxin research in 1960s. Aflatoxins are heat-resistant and can withstand exposure to normal cooking temperatures.

Where are Aflatoxins Found?

Aflatoxins occur mainly in the tropical regions of the world. The high humidity, high temperature of the environment, combined with less than ideal handling and storage of crops after harvest in developing countries, cause them to be more commonly found in a variety of crops like peanuts, maize, cereals, cottonseeds, tree nuts and some spices etc. On the other hand, when aflatoxins B1 and B2-contaminated crops are fed to cows, they are converted to the less potent aflatoxins M1 and M2 respectively and can be found mainly in milk, but also in the liver and kidneys. 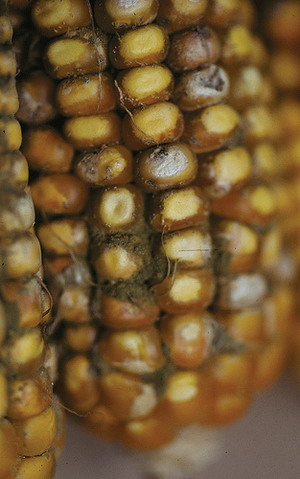 Aflatoxins are best known for their potential in causing liver cancer. The International Agency for Research on Cancer has classified all naturally occurring aflatoxins to be carcinogenic and aflatoxin M1 to be possibly carcinogenic to humans. Some researchers suggest that the effect of aflatoxin B1 in causing cancer is stronger in people carrying hepatitis B virus or hepatitis C virus. Hepatitis B is a common disease in Hong Kong and some 8-10% of the adult population are carriers. Researches on the interaction between aflatoxins and hepatitis viruses are still ongoing.

Aflatoxins also cause cell mutations in liver. The effect is found to be strongest in aflatoxin B1 than in aflatoxins G1, G2 and B2. Other researches in animals suggest that they possibly affect the immune system and impair growth. Cases of acute aflatoxin poisoning are still known to happen sporadically in developing countries.

Reduction of Aflatoxins in Food

Since Aspergillus species are ubiquitous in nature, it is not possible to totally eliminate aflatoxins from food. However, there are methods that can help reduce the amount of aflatoxins in the food supply. Proper agricultural practices can reduce the chance of stressing the plants, which in turn lower the possibility of pre-harvest aflatoxin contamination. Efforts should be focused on keeping aflatoxin levels in food as low as reasonably possible and those exceed legal limit should not be used as food.

During harvesting, crops should best be harvested at maturity if the weather permits. The harvested crops should then be dried as quickly as possible and removal of damaged products also helps. The crops should then be stored at proper temperature and humidity to minimize mould growth. Food manufacturers should also ensure that the aflatoxin level in raw materials they received complies with the safety standards.

Consumers should store food under dry and cool condition and discard food with signs of mould infestation.

We shall talk about other types of mould toxins in food in the next issue.