From Kobe Beef to Import Control of Meat in Hong Kong

Recently there have been media reports that the first batch of Kobe beef was exported from Japan to Hong Kong in late July 2012. The media also has raised questions regarding the import control of meat in Hong Kong. Kobe Beef is probably the best known beef coming from Japan. According to the Kobe Beef Marketing & Distribution Promotion Association, Kobe beef has a high degree of fat marbling that melts at low temperature, which contributes to its distinctive meat quality. Kobe beef, used to be sold exclusively in Japan , was exported for the first time in February 2012, with Macao as its first destination. Let's take this opportunity to talk about import control of meat in Hong Kong.

The import of beef from Japan had been suspended since 19 September 2001 after the detection of a case of Bovine Spongiform Encephalopathy (BSE), commonly known as the mad cow disease. After a thorough assessment and having satisfied with the enhanced control measures implemented by Japan against BSE, the Centre for Food Safety (CFS) partially lifted the suspension on 27 April 2007 . At present, only boneless beef from cattle less than 30 months of age with high risk materials, such as brain and spinal cord removed during slaughtering, is allowed to be imported from Japan .

In Hong Kong , the legal framework of food safety control is laid down in Part V of the Public Health and Municipal Services Ordinance (Cap. 132) and its subsidiary legislation.

Import control of meat is governed by the Imported Game, Meat and Poultry Regulations (Cap. 132AK) (IGMPR). Meat means flesh or other edible part of an animal from which beef, mutton, pork, veal or lamb is derived. Under the IGMPR, imported meat must be accompanied with a health certificate issued by a competent authority. It should certify, among others, that the meat is fit for human consumption.

Whenever there is a new source of imported meat, the CFS will assess the following information of the exporting country:

When the CFS has satisfied with the criteria of food safety in respect of meat from the prospective new source and has established a protocol with the exporting country, meat can be imported into Hong Kong.

As regards Kobe beef, it is derived from cattle in Hyogo Prefecture , Japan. As Japan is an approved source for import of beef into Hong Kong, import of Kobe beef is allowed.

Inspection of Farms and Meat Processing Plants of Exporting Countries

Adopting the concept of "from farm to table" to ensure food safety, the CFS conducts inspections of farms and meat processing plants in the Mainland and overseas countries. 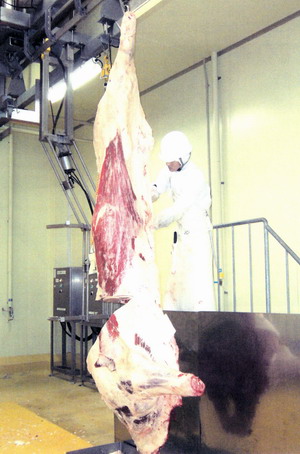 After the CFS is satisfied with the test results of the first six imported meat consignments from a new source, subsequent consignments will be put under the regular food surveillance programme. Samples will be taken at import, wholesale and retail levels for testing on random basis. Over 8 000 imported consignments of meat are inspected by the CFS every year (Table 1).

In the past three years, there were nine unsatisfactory samples due to the presence of veterinary drug residues exceeding the legal limit. Appropriate follow-up actions, including source tracing, issuance of warning letter, follow-up sampling and prosecution, if applicable, have been taken by the CFS. Samples of Kobe beef were taken by the CFS in July 2012 for chemical analysis and testing of radiation level, and the results were satisfactory.

Advice to the Public and Trade