This is the last article of a series of three that focuses on marine toxins originating from minute organisms (e.g. planktons) which can affect seafood safety. In the last issue, we discussed about the paralytic shellfish poisoning (PSP). We will talk about four other shellfish poisoning toxins in this article. 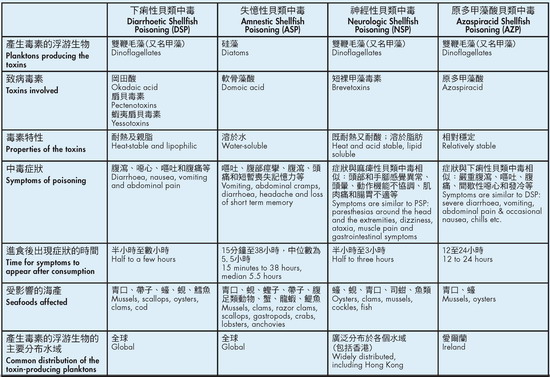 Ways to Reduce the Chance of Shellfish Poisoning

Consumers should avoid consuming the digestive and reproductive glands of shellfish where much of the toxins often concentrate. Where possible, all organs of bivalves should be discarded and only the adductor muscles should be consumed. The cooking liquid should also be abandoned. One should always buy shellfish from reliable sources, and scrub and clean the shells thoroughly before cooking. Overindulgence in shellfish should be avoided.