In April and May, a green group announced a series of reports alleging that multiple pesticide residues, including some that were prohibited in the Mainland, were detected in vegetables, loose tea leaves and tea bags collected in the Mainland and Hong Kong, and considered pesticide abuse was a serious problem. What are the public health implications if pesticide residues are found in crops? In this issue, let's take a closer look into this subject.

Pesticide "RESIDUES" and Their Safety Assessment

To-date, the use of pesticides for effective pest management remains the prevalent practice of modern agriculture. The application of pesticides in a way strictly follows Good Agricultural Practice (GAP) can ensure the levels of pesticide residues in food as low as practicable. In general, Maximum Residue Limits (MRLs) stipulated in law are the maximum concentrations of pesticide residues to be legally permitted in or on food and agricultural commodities. They are set for individual pesticide-food pairs, established by field trials using GAP. Internationally, the Codex Committee on Pesticide Residues, under the Codex Alimentarius Commission, is charged to set standards including MRLs for pesticides in foods based on the recommendation of the Joint Food and Agriculture Organization (FAO) / World Health Organization (WHO) Meeting on Pesticide Residues. 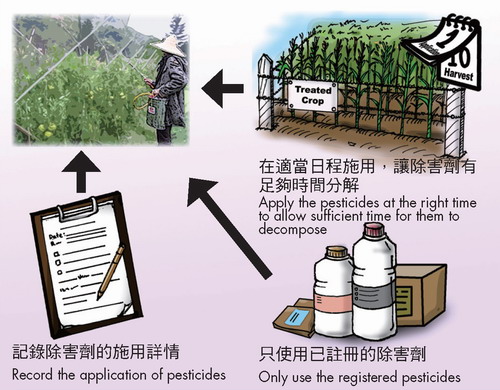 Proper use of pesticides in accordance with Good Agricultural Practice (GAP) can reduce the levels of pesticide residues in food to minimal levels.

As for the claim on "non-permitted pesticides", it should be noted that some pesticides are prohibited from use in certain crops but not in all kinds of crops, i.e. the prohibition applies to specific "pesticide-food" pairs. The pesticide residues detected in the samples concerned may not be a result of blatant violation of prohibition. Further investigation would be required to reveal the potential sources of contamination.

With regards to the reports of the green group, the CFS had evaluated their testing results and took samples of vegetables from relevant vendors for testing of pesticide residues. All results were satisfactory. The CFS will liaise with the Mainland authorities for follow-up actions.

The CFS has in place vigorous surveillance programmes for food commodities to safeguard public health. In recent years, the results of the CFS's pesticide residues surveillance programme have been highly satisfactory. From January 2009 to March 2012, more than 57 000 samples were tested and only four unsatisfactory results were recorded. Nevertheless, there is absolutely no room for complacency. The Government has further stepped up its efforts to regulate pesticide residues in food. The Legislative Council has recently passed a pesticide residue in food regulation which provides comprehensive control of pesticide residues in food in Hong Kong. The regulation will come into operation on 1 August 2014 after a grace period of some two years.