The use of pesticides in food production inevitably leaves residues in the final products and the food safety regulatory authorities usually set standards for pesticide residues in food. These standards, known as the "Maximum Residue Limits (MRLs)", are the maximum legally permitted levels of pesticide residues in food. The primary purpose of setting MRLs is to ensure that the use of pesticides during food production (e.g. use of insecticides during crops growing and fungicides during crops storage) leaves residues in food as low as reasonably achievable, and thereby minimising the risk to public health. The establishment of MRLs also facilitates international trade by providing references to trading partners.

How are MRLs Established?

In brief, MRLs are established by evaluating pesticide residue data in food commodities when the pesticide is used according to good agricultural practice (GAP). GAP is a set of nationally authorised conditions to use the pesticide safely (e.g. in relation to public health and environmental safety concerns) for effective and reliable pest control. Various conditions, such as the type of commodities authorised for using the pesticide, the recommended application rates, frequencies, and amount as well as the duration between the last application of the pesticide and harvest, are prescribed in the GAP.

The adoption of GAP aims at ensuring that levels of pesticide residues in food are as low as practicable, while not compromising the intended functions of the pesticides (i.e. for preventing, destroying, repelling or mitigating pests). As the conditions in different countries (e.g. types of pests and the environmental conditions) are different, the approved GAP for individual pesticide may not necessarily be the same in different countries. As such, different MRLs may be established by different countries according to their GAP. Nevertheless, all these MRLs would only be adopted if they provide sufficient protection to the consumers' health.

Although the establishment of MRLs can protect consumers' health, it should not be viewed directly as the "food safety limits". In fact, MRLs of pesticides are usually established at safe levels such that the total dietary intakes are lower than the safety reference values (i.e. ADI and ARfD) under normal consumption (Figure 1). Therefore, consumption of food containing pesticide residues higher than MRLs does not automatically imply that consumers' health is at risk, provided that the total dietary intake is lower than the safety reference values. 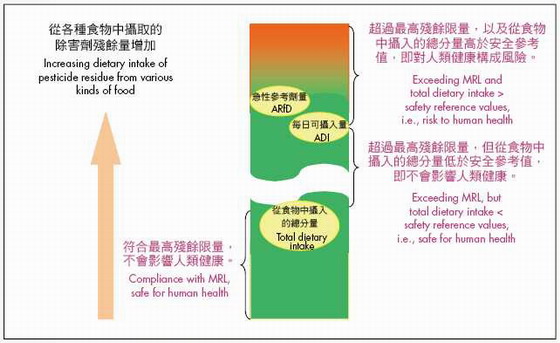 Is the Establishment of MRLs Adequate to Protect Public Health?

During the establishment of MRLs, exposure assessment is usually conducted to assess whether the proposed MRLs based on GAP are adequate to protect public health. There are different methods to conduct the exposure assessment, and one of them is based on the local food consumption patterns and the assumption that food contains pesticide residues at MRLs. The exposure assessment will also consider the possibility that residue of the same pesticide may be present in different food commodities (e.g. tomato, apple and other vegetables) upon authorised use. The resulting overall dietary intake of a particular pesticide will then be compared with the safety reference values (i.e. ADI and ARfD) to assess the possible health risks, if any. It is essential that foods complying with the MRLs are safe for human consumption.

To sum up, proper use of pesticide could improve quality and quantity of food, but inevitably leaves some residues in food. If pesticide is used according to GAP, the residual level would be small and consumption of these foods is not likely to affect health.