On 27 April 2007, the Centre for Food Safety (CFS) announced that Paralytic Shellfish Poisoning (PSP) toxins were detected at a high level in a scallop sample taken from a local market. Having considered the high health risk associated with the level of PSP toxins, the CFS advised members of the public to stop consuming scallops (Sin Pui) for the time being. Meanwhile, the CFS stepped up surveillance and initiated source-tracing of the affected shellfish. Subsequent sampling and testing revealed the presence of PSP toxins in the range of 1 120 to 2 560 micrograms per 100 grams in another seven scallop (Sin Pui) samples, all belonging to the same species, Patinopecten yessoensis. Another four samples of scallop (Sin Pui) belonging to a different species and five samples of a different type of scallop (Dai Tsi) were all found to be satisfactory. At around the same period, the Centre for Health Protection (CHP) received reports of suspected PSP cases in association with the consumption of scallops. 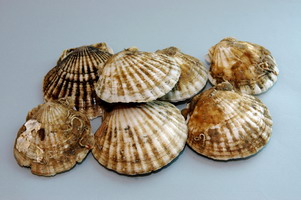 PSP Toxins in Shellfish and Other Seafood

PSP toxins are a group of some 20 closely related tetrahydropurines with varying toxicities amongst which saxitoxin being the most toxic. PSP toxins are produced by certain species of microscopic algae. Under favourable environmental conditions, microscopic algae may multiply rapidly and result in algal blooms (commonly known as "red tide" because seawater can become discoloured from the dense accumulation of algae). In the event that the species of algae concerned are toxin-producing, filter-feeding bivalve shellfish such as scallops, mussels, oysters, clams and cockles which feed on these algae in the affected seawaters can become contaminated.

Bivalve shellfish can accumulate PSP toxins in their tissues, although they are relatively resistant to the toxic effects. The rate of toxin taken up by the shellfish, the period of toxin retention and the distribution of toxins within the shellfish tissues are highly dependent on the particular species of shellfish, as well as prevailing environmental conditions. Some shellfish species can remain toxic for extended period of time from weeks up to several months. The concentration of PSP toxins is generally higher in the viscera of contaminated shellfish.

Currently, there are no known methods available for detoxifying live contaminated shellfish in a way that is safe, fast and economically feasible, nor reliable quick test to determine the presence of PSP in shellfish flesh. As such, algal toxin monitoring programmes which monitor for the presence of toxin producing algae in shellfish harvesting or culture zones and for toxins in shellfish flesh are widely practised preventive measures against shellfish poisoning across the world. With reference to the routine surveillance programme conducted by the CFS in 2004-06, some 1300 molluscan shellfish samples were tested for PSP toxins, five samples were found unsatisfactory.

Besides bivalve shellfish, PSP toxins can accumulate through the marine food web and be found in gastropods like whelks and abalones, crustaceans like crabs and lobsters as well as fishes such as mackerels and puffers. Such contaminations, however, are reported less frequently than those related to their bivalve shellfish counterparts.

The levels of PSP toxins at which intoxications occur vary considerably in humans, mainly due to individual difference in sensitivity. According to literature, the doses causing symptoms of PSP in humans can be as low as 120 micrograms per person. Some reported a dose of over 1 000 micrograms to cause mild symptoms.

The symptoms of PSP are predominantly neurological and the onset is usually within minutes to hours after ingestion of the shellfish. Initial symptoms may include tingling, numbness of the mouth and extremities, headache, dizziness and gastrointestinal discomfort. In the majority of cases, symptoms resolve completely within a few days. In severe cases, difficulty in swallowing and speech, paralysis with respiratory arrest and even death may occur. There is no antidote for PSP toxins, clinical management for affected individuals is therefore supportive.

Poisonous shellfish neither looks, smells nor tastes different from uncontaminated shellfish. PSP toxins are heat-stable and cannot be destroyed through normal home cooking or steaming. Furthermore, the toxins are water-soluble and may dissolve in the cooking liquid, rendering the cooking liquid highly toxic.

Members of the public are advised to remove the viscera and gonads of shellfish before cooking (please refer to illustration). They should eat a smaller amount of shellfish in any one meal, and avoid consuming the cooking liquid. They should seek medical advice immediately if symptoms occur after consuming shellfish.

Illustration: The anatomy of a scallop 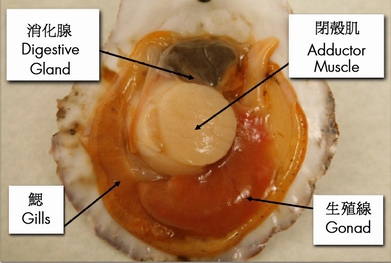 Members of the trade are advised to source shellfish from reliable suppliers, and maintain a good recording system to facilitate source-tracing if necessary.

Readers may obtain further information from the following websites: