The safety of eating pig livers has again raised public concern following recent local media reports on some serious hepatitis E cases, including a patient who had liver transplant and another patient admitted to hospital in critical condition who later passed away.

In recent years, there has been a rising trend of hepatitis E case notifications, from 38 in 2004 to 119 in 2011, in Hong Kong . Since 2008, hepatitis E has taken over hepatitis A and has become the most common acute viral hepatitis reported in Hong Kong . 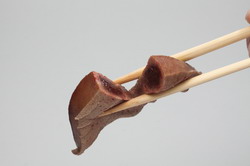 Noting the possible risk of contracting hepatitis E from pig liver, the Centre for Food Safety (CFS) has published a risk assessment study , which provides an overview on the prevalence of hepatitis E virus (HEV) in fresh pig livers available in local market. Since HEV causes subclinical infections in pigs in most cases, laboratory analysis is needed for the detection of HEV in pig livers. Study results showed that about 30 per cent liver samples of roaster pigs (around four months old) were positive for HEV while negative results were found in all porker pig (around six months old) liver samples. In addition, some of the positive samples were found to have the same gene sequences with those in human cases, which suggested that undercooked pig livers could be one of the possible sources for hepatitis E in Hong Kong. As gene sequences of HEV found in many human cases did not match with those found in pig livers, other foodborne sources, such as shellfish, could exist.

To foster public awareness on preventing hepatitis E and other foodborne diseases, health advice such as always observing good personal and food hygiene and cooking animal offal, especially pig liver as well as meat and shellfish thoroughly before consumption have been emphasised in various CFS publications. For example, sliced raw pig liver should be boiled for at least three to five minutes depending on thickness and quantity. Guides on "Practise Food Hygiene to Prevent Hepatitis A and Hepatitis E" have also been prepared for the trade and consumers.