Having talked about Avian Influenza in the last issue, we now move on to another zoonotic disease which often catches our attention – Bovine Spongiform Encephalopathy (BSE), commonly known as mad-cow disease.

The Disease in Animals and Humans

BSE is a fatal disease in cattle that causes disease of the brain and spinal cord. It is caused by a prion protein which is difficult to be destroyed or denatured. Materials including equipment used in the abattoir to slaughter cattle that have been in contact with contaminated tissues are difficult to clean. BSE has a long incubation period in cattle, about 30 months to eight years, usually affecting adult cattle at a peak age onset of four to five years. All breeds of cattle can be affected. Research demonstrates the most dangerous tissues of cattle with natural BSE can be found in brain, spinal cord and retina. These are designated as "specified risk materials" and are removed or destroyed during slaughtering to prevent them from entering the food and feed chain.

Humans who have ingested BSE affected food of bovine origin may develop variant-Creutzfeldt-Jakob disease (vCJD). The incubation period is unknown but likely to be many years or decades. The disease usually begins with a progressive mental deterioration that soon becomes associated with progressive unsteadiness and clumsiness, visual deterioration, muscle twitching and a variety of other nervous symptoms and signs. The disease is invariably fatal and there is no proven treatment or prophylaxis.

The link between BSE and vCJD in human and consumption of BSE contaminated food makes it a public health issue.

Past Epidemics in Cattle

In 1986, epidemic of BSE in cattle was first reported in England. It was caused by feeding meat and bone meal made from cattle as a feed supplement to calves. The United Kingdom (UK) and European countries were most affected by the epidemic while only sporadic cases were reported in other Asian countries or the United States (Figure 1). In the UK, the country worst affected, more than 180,000 cattle were infected and 4.4 million slaughtered during the eradication program.

The number of cases of BSE in the world was overshadowed by the astoundingly high incidence of BSE that occurred in the UK, peaking in 1992 with over 37,000 cases, in comparison to the few hundred cases detected in the other 24 countries affected, including numerous countries in the European Union, as well as the United States, Canada and Japan. 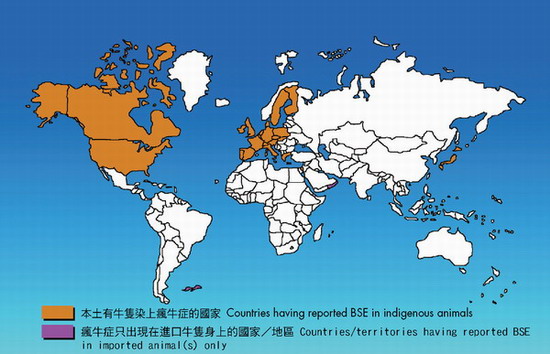 Public health control measures, such as surveillance, killing sick animals, or banning specified risk materials, have been put in place in many countries, particularly in those with indigenous cases of confirmed BSE, in order to prevent potentially BSE-infected tissues from entering the human food supply. The most stringent of these control measures, including a program that excluded all animals over 30 months of age from the human food and animal feed supplies (the Over Thirty Month (OTM) rule), was applied in the UK and appeared to be highly effective. With the decrease in British BSE cases, the OTM rule was replaced in 2005 with a BSE testing regime. In June 2000, the European Union Commission on Food Safety and Animal Welfare had strengthened the European Union's BSE control measures by requiring all member states to remove specified risk materials from animal feed and human food chains as of 1 October 2000.

Public health measures in the exporting country are assessed prior to giving permission to the importation of beef to Hong Kong. This ensures confidence in the proper implementation of the applied public health measures in BSE affected countries that minimises the chance of transmission. Consequently the risk of acquiring vCJD from food in Hong Kong is extremely low. Milk and milk products from cows are not believed to pose any risk for transmitting the BSE agent.