At the end of last year, the Centre for Food Safety (CFS) reported the link between human hepatitis E cases and hepatitis E virus (HEV) in pig livers, possibly through foodborne transmission of HEV. In recent years, Hong Kong witnessed a rising trend of hepatitis E and in 2010 recorded 117 cases, the highest number of hepatitis E cases ever notified in a year. In this issue, we would talk about the virus and the risk in food.

Hepatitis E is the inflammation of liver caused by HEV. Symptoms include fever, malaise, anorexia, nausea, abdominal pain, dark urine and jaundice. The disease is generally self-limiting and resolves within two weeks; however, it can cause serious complications in some high risk populations, i.e. pregnant women, patients with pre-existing chronic liver disease, and elderly. The mortality rates for pregnant mothers and individuals with pre-existing chronic liver disease are reported to be high. Older people seem to be relatively more susceptible to hepatitis E.

HEV is primarily transmitted via the faecal-oral route, where contaminated water or food has been implicated in major outbreaks. Due to poor environmental sanitation, hepatitis E is common in developing countries. In most industrialised countries, the disease is rare and mostly occurs in travellers returning from endemic areas. However, there has been an increase in cases not related to travel in developed countries. It is not known whether these cases were caused by inadequately cooked food such as shellfish and pig offal which are documented possible food sources for HEV. 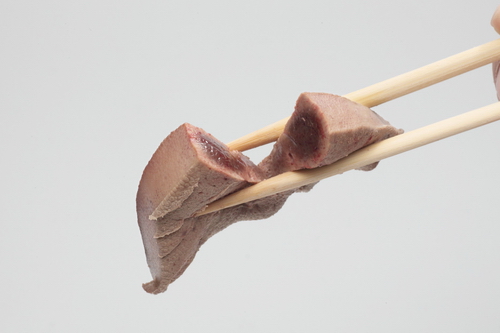 Outside surface done does not mean deeper portion is thoroughly cooked

HEV has been found in pig populations across the world and in commercial pig livers in Japan, United States, and Netherlands. Locally, the CFS collected samples from slaughterhouse in 2009 and found that around 30% of roaster pigs (around 4 months old), but none of porker pigs (around 6 months old), which contribute to around 2% and 98% of total admission of live pigs from the Mainland respectively, were positive for HEV. More importantly, genetic homology, i.e. same gene partial sequences, was identified between some HEV isolates from pigs and current and past human cases. This suggests that some of the HEV isolates may have been present locally for a period of time and inadequately cooked pig livers could be one possible source for hepatitis E in Hong Kong.

Since many isolates from human cases were not matched with those from pigs, other possible sources may exist. Bivalve shellfish, which feeds by filtering out the seawater, tends to concentrate viruses, including HEV, present in the polluted water in the process. Although previous studies in Hong Kong did not show shellfish as a significant source for HEV, shellfish is a recognised potential source for foodborne viruses including HEV. In addition, there have been reports on transmission of hepatitis E by blood transfusion, and on the potential of occupational exposure to HEV in people like pig farmers and veterinarians.

Comparing to vegetative bacteria, foodborne viruses are generally more resistant to heat. In addition, persistence of the viruses may be different in different food substrates, e.g. hepatitis A virus in bivalve molluscs needs more stringent conditions than the virus in milk for the same level of inactivation. Heat treatment usually recommended (i.e. cooking to an internal temperature of 75°C for 30 seconds) to food safety may not be adequate for some virus-food combinations. More stringent time and temperature combinations are required.

For taste and other sensory reasons, inadequately cooked pig livers are preferred by some consumers. To prevent hepatitis E, food trade and consumers should cook food thoroughly, especially during hotpot or congee cooking. For sliced pig liver, depending on thickness and quantity, boil at 100°C or stir-fry in hot skillet/wok for at least three to five minutes. Heating to an internal temperature of 90°C for 90 seconds is required for cooking of molluscan shellfish; hence, boil at 100°C until their shells open; boil for additional three to five minutes afterwards. In addition, food trade and consumers are also advised to observe good personal and food hygiene practices. Consumers could ask for thoroughly cooked food when eating out, this is particularly important for high risk populations.