Apart from the weapon – toxins, some pathogenic bacteria have a shield to help them survive the cooking process. Bacteria can live in a vegetative state in which they can grow and reproduce. Few of them can also exist in spore form which is unable to grow or reproduce but can help the bacteria to survive in an environment that is unfavourable for growth.

Bacillus cereus and Clostridium perfringens are examples of pathogenic bacteria that can exist in both spore and vegetative forms. The thick-walled structure of the spore is resistant to heat and it can help the pathogenic bacteria survive the heat of cooking. The heat of cooking not only activates the germination of spores to become vegetative cells, but can also kill other bacteria that are not heat-resistant resulting in an environment short of competitors for the vegetative cells to grow. Foods, which are improperly left at a moderate temperature (e.g. room temperature) for a long time after cooking, allow the growth of large amount of vegetative cells. Therefore, we should avoid prolonged cooling of cooked food and immediately store cooled food at 4oC or below.

Some people may think that prolonged cooling and storage at room temperature is not a problem if the food products are reheated thoroughly before consumption, since reheating kills the vegetative cells. This is partially true, but there is a catch. You may recall from the last issue that Bacillus cereus can also produce heat-resistant toxin which cannot be destroyed by cooking process. 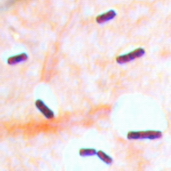 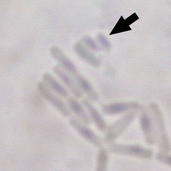 Some other factors may be more important than the spore-forming ability of the pathogenic bacteria in causing foodborne diseases. Vibrio parahaemolyticus can be found naturally in marine water, and commonly associated with raw or undercooked seafood products and cross-contaminated cooked food. Consumption of raw seafood from unhygienic sources may be one of the reasons to account for its high prevalence. Salmonella species can be found on meats and poultry as well as fresh produce tainted with contaminated water. Inadequate cooking and cross-contamination during storage or food preparation may result in salmonella infection. Humans are the common reservoir for Staphylococcus aureus. Contamination of food, especially in case of poor personal hygiene, can occur by direct contact, indirectly by skin fragments, or through respiratory tract droplets. In addition, storage of foods at improper temperature can help all these bacteria to grow to large number. You can see that most of the problems are due to improper or unhygienic handling of foods.

Temperature for Storage and Cooking

Although Listeria monocytogenes can survive and multiply at 0oC, it can be destroyed by normal cooking. It is important to avoid post-cooking contamination of ready-to-eat food and prolonged storage of raw foods that may contain this bacterium.

Bacteria are destroyed under different temperature/time combination. In general, cooking food to an internal temperature of 75oC for at least 30 seconds can kill most of the pathogenic bacteria (but not the spore form).

Different characteristics of pathogenic bacteria may aid in causing foodborne disease, but the primary causes of food poisoning are improper or unhygienic handling of foods by humans. More emphasis on the proper food handling practices can readily reduce risk of bacterial food poisoning.