Recently, the United States Food and Drug Administration warned consumers to avoid eating tomalley in American lobster because of potential contamination with high levels of the toxins that cause Paralytic Shellfish Poisoning (PSP). The advisory applies only to tomalley, the soft, green paste-like substance found in the body cavity of the lobster that functions as the liver and pancreas. The lobster meat is, however, safe to eat. Cooking does not eliminate the PSP toxins.

Symptoms of PSP include tingling and/or numbness of the mouth, face or neck; muscle weakness; headache; and nausea. In extreme cases, it may lead to respiratory failure and death. Symptoms usually occur within two hours of exposure to the toxin.

The Centre for Food Safety has brought this issue to the trade's notice through the rapid alert system. To avoid PSP, the viscera and gonads of shellfish should be removed before cooking. Children, patients with chronic illness and the elderly may be more susceptible to poisoning and should be cautious in consuming shellfish. When symptoms occur after consuming shellfish, seek medical advice immediately.

llustration: Tomalley (under the arrow) of American lobster 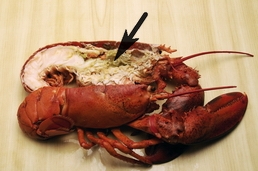