Local media reported in early September the high prevalence of Clonorchis sinensis infection in Shenzhen, notably associated with consumption of raw or undercooked freshwater fish. Clonorchis sinensis, also known as Chinese or oriental liver fluke, is a type of foodborne parasites that were discussed earlier in this journal. Here we go further to look at this fluke more closely.

Transmission of the fluke relies on the presence of snails and fish in freshwater ponds. Eggs excreted from humans or other infected mammals, e.g. pigs, are ingested by snails and developed into the free-swimming form (i.e., cercariae). The cercariae in the pond will get into contact with the fish skin and changed into an encysted form called metacercariae. When humans eat the infected fish, the metacercariae will come out from the cyst while in the duodenum and migrate to the biliary duct in the liver. They will get mature in the biliary duct and start to form eggs that can pass with bile into faeces and continue the transmission cycle.

Light infections by the fluke cause mild or no symptoms, while large numbers can cause intense infection for long duration and result in loss of appetite, diarrhoea, and fever. The fluke can also cause obstruction of the bile duct and liver cirrhosis. In severe cases, the infection can result in chronic jaundice and eventually the higher occurrence of cholangiocarcinoma (cancer arising from bile duct cells). Clonorchis sinensis is recently classified as "carcinogenic to humans" (Group 1) .

Infection of Clonorchis sinensis is endemic in Mainland China , Taiwan , Korea and some other countries and areas in Southeast Asia . It is roughly estimated that Clonorchis sinensis contributes to more than 80% of local human cases of enteric parasites. People are infected by consuming raw or undercooked freshwater fish containing metacercariae. More than 100 species of freshwater fish, mainly carp, e.g. grass carp and big head carp, can be affected by the fluke. High prevalence rate, up to more than 80%, was reported in grass carp in certain endemic regions. Dishes with freshwater fish eaten raw, undercooked, salted, pickled, or smoked may contribute to endemicity. One can hardly distinguish the affected fish or identify the infective metacercariae as they are too small for naked eyes. On the other hand, some freshwater shrimps can serve as second intermediate hosts for this fluke, but there is lack of epidemiological evidence on their association with human infections.

Apart from humans, cats, dogs, pigs and several other fish eating mammals are also susceptible to the infection. Dead freshwater fish may be used to feed animals in some regions and the metacercariae present can then be transmitted to these animals. Faeces from humans or animalscan help to disperse the eggs in the environment and water bodies, e.g. when the faeces are used as fertiliser or when toilets are built over fishponds in some rural aquaculture areas.

Do not eat raw or undercooked freshwater fish. The ancient practice of eating Chinese Yu Sang (i.e. freshwater fish intended for raw consumption) has been prohibited for sale in Hong Kong for more than 30 years. One should also avoid such dish while travelling. Wine, vinegar, wasabi, mustard and spices cannot destroy parasites including the fluke. In particular, freshwater fish may be undercooked in some cases, such as during hotpot and congee cooking, or when the fish slices are too thick. 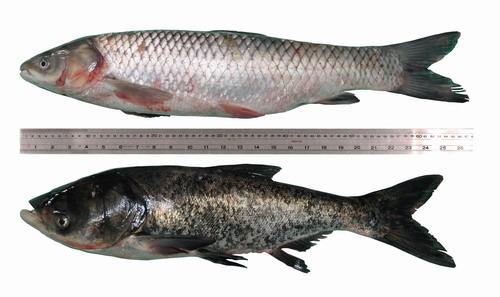 Freshwater fish, such as grass carp (above) and big head carp (below), should be cooked thoroughly before consumption.