The term "preservatives" is often linked to a negative image and considered something undesirable or disease causing. In this issue, let's decode some mythical substances i.e. nitrates/ nitrites, sulphites and parabens which are commonly used in our foods.

Do Nitrates and Nitrites Cause Cancers?

Nitrates occur naturally in the environment and plants. They are essential nutrients for plants including vegetables to grow. Our dietary exposure to nitrates is mainly through the consumption of vegetables. Nitrites, on the other hand, are mostly converted from nitrates by bacteria or enzymatic actions.

Nitrates and nitrites are good at inhibiting various bacteria, including the anaerobic Clostridium botulinum. This bacterium can produce toxin, causing acute and severe botulism, a neurologic illness with paralysis and even death. Due to the technological needs, both are only permitted in some processed meats and cheeses as preservatives locally.

One main concern about the use of nitrates and nitrites is that they may be converted to some substances which are probably carcinogenic. Studies have shown that nitrates and nitrites used in processed meats and cheeses only accounted for a small proportion of the total exposure to these converted substances and eliminating them would not have a major effect on the cancer risk. Therefore, the benefit of using these effective preservatives to prevent botulism outweighs the risks. In addition, food preserved with nitrates and nitrites are often added together with ascorbates (vitamin C) or isoascorbates, which can effectively prevent the conversion mentioned above. 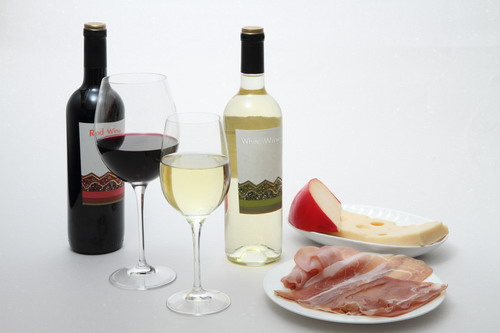 Nitrates and nitrites are commonly used permitted preservatives in cheese and ham, while sulphites are often found in wine.

Sulphites are a group of chemicals which naturally occur in our body as well as some of our foods. While occurring naturally in wines, sulphites are also added during wine making prior to fermentation to eliminate interfering microorganisms. They are also commonly added to dried fruits, pickled vegetables and sausages as preservatives.

Sulphites are safe for most of us. However, some sulphite-sensitive people, many of whom also have asthma, may develop allergic symptoms including asthmatic attacks when they eat food containing sulphites.

If you are sensitive to sulphites, the only way to stay away from a reaction is to avoid all sulphite-containing foods by reading food labels carefully. As required by law, if a food consists of or contains sulphite in a concentration of 10 ppm or more, the functional class e.g. preservative of the sulphite and its name shall be specified in the ingredient list. As sulphites may be presented in various chemical names when used as food additives, you have to watch out for these names i.e. sulphur dioxide, sodium / potassium / calcium sulphite, sodium / calcium hydrogen sulphite, sodium / potassium metabisulphite, potassium bisulphite, sodium thiosulphate and sulphurous acid.

Do Parabens Give Rise to Reproductive Toxicity?

The term "parabens" is the common name for a group of benzoic acid derivatives - esters of para-hydroxybenzoic acid. Parabens occur naturally in blueberries, prunes and cinnamon. They are also used as preservatives to inhibit yeasts and moulds in various foods such as chilli sauces and shrimp paste.

There are many subtypes of parabens depending on the number of additional carbon chain attached. One type, the propyl paraben, has recently been found to cause undesirable reproductive effects on male rats. In view of this finding, propyl paraben has been taken out from the permitted preservative list and is no longer allowed in all foods in Hong Kong. Some other types of parabens i.e. methyl and ethyl ones which do not have such undesirable effect are continued to be allowed for use in foods including preserved fruits and soft drinks locally.

The unique features of nitrates/ nitrites, sulphites and parabens show that adverse health effects resulting from proper use of preservatives are very unlikely in the general population. Nonetheless, having a balanced diet to avoid excessive exposure to any food types or additives from any specific food item is always advisable.

In the next issue, let's move on to another food additive that can extend the life of food – antioxidant.