The spread of antimicrobial resistance (AMR) bacteria in both humans and food-producing animals was discussed in the last issue.  From time-to-time, there are media reports on the finding of AMR bacteria in foods or food-producing animals.  AMR bacteria are usually highlighted in media report as “superbugs” which generally refer to microorganisms that have developed AMR.  People may worry about contracting different types of superbugs in foods.  In the second article of this series, we will look into superbugs and relevant preventive measures in relation to food handling.

Different superbugs have been reported usually due to their resistance to wide range of antimicrobials or to certain last-resort antimicrobials which suggests the emerging threats of treatment failure.  They are usually named for their resistance genes or traits together with the microorganisms.  Extended-spectrum β-lactamase (ESBL)-producing Enterobacteriaceae is one of the superbugs of concern. β-lactam is a large class of commonly used antibiotics.  ESBLs are enzymes that can break down nearly all β-lactams and make them ineffective for treatment. 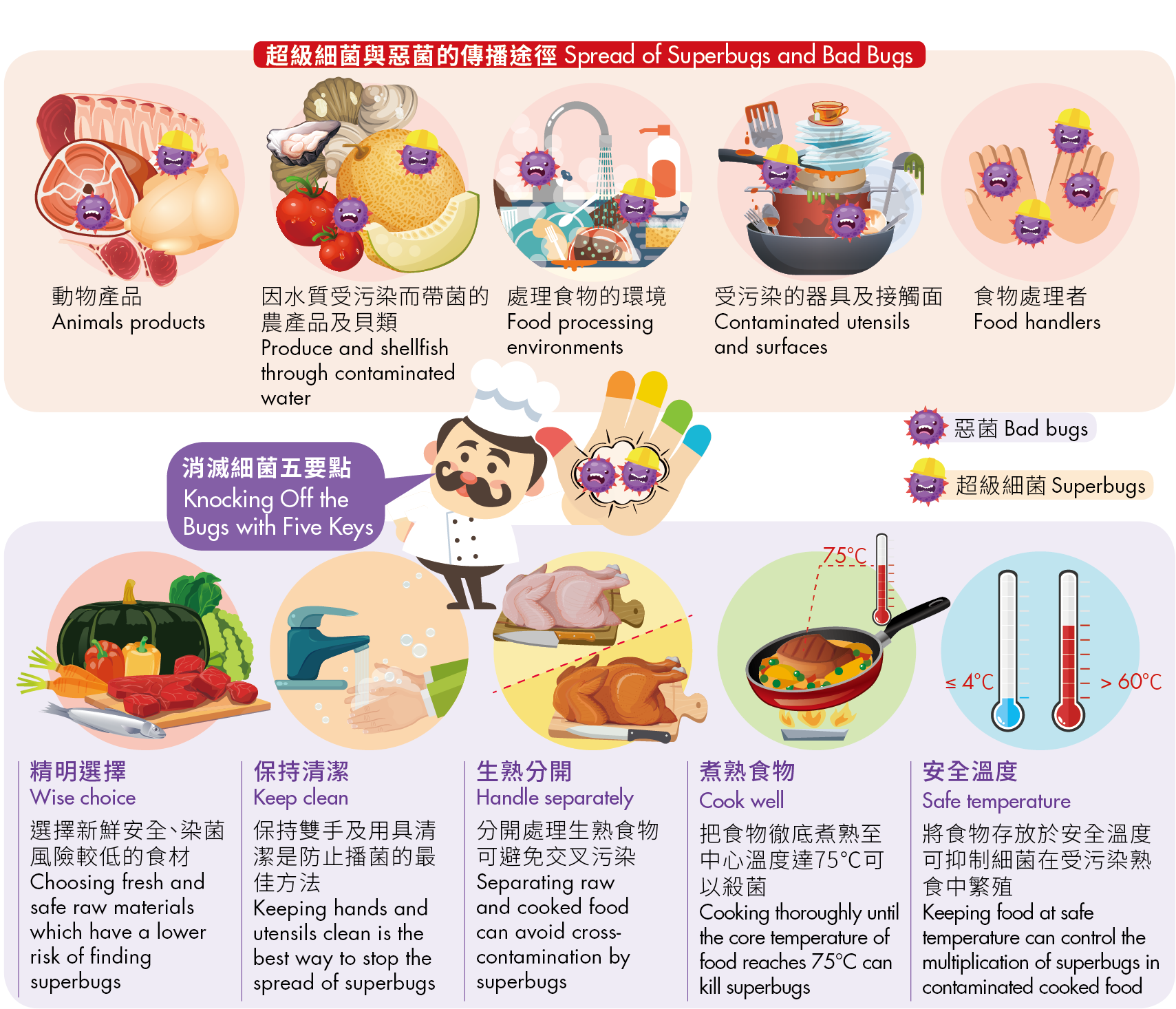 Figure: Combating superbugs, as other bad bugs, with 5 Keys to Food Safety.

Knocking Off Superbugs with Five Keys to Food safety

Foodborne pathogenic bacteria, i.e. bad bugs, can make you sick while those that are superbugs are  more dangerous as treatment options will be limited.  Detecting superbugs in foods may raise concern on whether we are having unsafe food or these foods should be thrown away.  In fact, cooking food until the core temperature reaching 75°C can kill most bacteria, including both bad bugs and superbugs.  Furthermore, observance of good hygienic practices can minimise cross-contamination by both superbugs and bad bugs.  That’s why following the 5 Keys to Food Safety (Figure) in daily life for food handling is important for combating superbugs, as well as other bad bugs.  In addition, susceptible populations and those who wish to further reduce the risk of foodborne illnesses should avoid consuming raw and undercooked foods which are more likely to carry microorganisms, including superbugs than thoroughly cooked foods.