In 1928, penicillin, the first antibiotic, was discovered by the British physician-scientist Sir Alexander Fleming. It was hailed as the miracle drug of the 20th century as it helped cure diseases, which were regarded deadly back to the days, such as meningitis and pneumonia. However, less than a century since the great discovery, antimicrobial resistance (AMR) has become a major global public health concern. In 2015, the 68th World Health Assembly has launched a global action plan on AMR to combat this emerging health threat in the approach of One Health. To tackle AMR locally, the Government has launched the Hong Kong Strategy and Action plan on Antimicrobial Resistance (2017-2022) in 2017 and calls for multi-sectoral collaboration.

According to the World Health Organization, AMR is the ability of a microorganism (like bacteria, viruses and some parasites) to stop an antimicrobial agent (such as antibiotics, antivirals and antifungals) from working against it. As a result, standard treatments become ineffective, infections persist and may spread to others. Nevertheless, AMR is a natural phenomenon. Microorganisms gain resistance spontaneously by gene mutation or gene transfer among each other.

Many factors lead to the rise of AMR. One of the major contributions is misuse and overuse of antimicrobial drugs in both humans and animals (see fig), which accelerates the emergence of AMR in microorganisms. When antibiotics are given to sick people or food-producing animals, susceptible bacteria are killed and bacteria with resistant genes survive. Therefore, AMR bacteria may outgrow their counterpart and develop in our bodies or gut of food-producing animals. When patients, carrying the resistant bacteria, go to hospitals, clinics or communities, these AMR bacteria spread to others through poor hygiene and unclean facilities or direct contact. 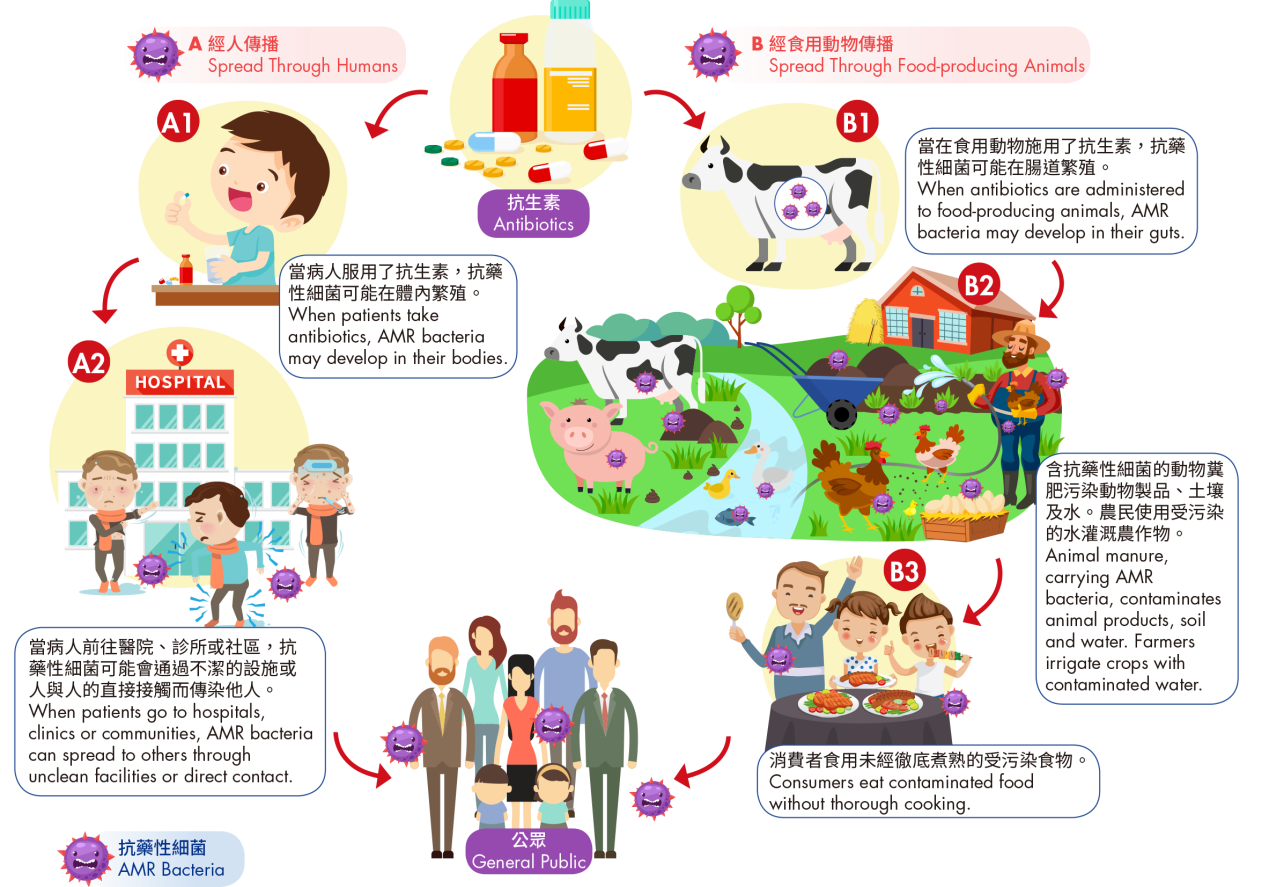 The spread of AMR bacteria through humans (Path A) and food-producing animals (Path B).

AMR is also a food safety concern. AMR bacteria developed in animal gut can spread through the food chain. When the food-producing animals are slaughtered, meat and their products can be contaminated by the excreta colonised with AMR bacteria. AMR bacteria can also enter the food chain through fecal contamination of soil or water, and spread to fruits, vegetable or other produce that are irrigated with contaminated water.  People may be exposed to AMR bacteria when they consume contaminated food without being thorough cooked, prepare food with poor food hygiene practice, or contact with animal manure.

What Are the Measures to Contain AMR in Food Chain?

To effectively minimise the emergence and contain the spread of AMR in food chain, coordinated effort from people in all sectors, including veterinary profession, agriculture, environment and food industry is needed. Preventive measures are of the utmost importance. For example, farmers should optimise use of antimicrobials in livestock.  Antibiotics should not be used as growth promoters.  Veterinarians should assist food animal production farm to adopt good husbandry practices to reduce the need of antimicrobials. Food producers should take effective sanitation measures to maintain food hygiene and minimise the cross contamination during food processing.

Our next article will provide more information on how to prevent ourselves from infection with AMR bacteria already present in food.