What is One Health?

The One Health concept was introduced at the beginning of the 2000s. The World Organisation for Animal Health (OIE) has summarised it as an idea that human health and animal health are interdependent and bound to the health of the ecosystem in which they exist. The Food and Agriculture Organization (FAO) of the United Nations, the OIE and the World Health Organization (WHO) recognise that addressing health risks at the human-animal-ecosystems interfaces requires partnerships among players with different perspectives on some issues and different levels of resources. It is the integrative effort of different disciplines working in the community, as a nation and globally to aim for optimal health for humans, animals and the ecosystem. The concept of One Health has been formally endorsed by the FAO-OIE-WHO Tripartite and was presented in the Tripartite Concept Note in April, 2010.

The Interconnection of Human, Animals and Ecosystem

As the human population and their movement across countries continue to increase, the interconnection of human, animals and the ecosystem becomes more significant. The demand for food rises resulting in increase in animal production to provide food. Apart from animals providing food, the human-animal bond, the dynamic relationship between people and animals in that each influences the psychological and physiological state of the other, has also continued to grow. All of the above may contribute to increase in the contact between human and wild animals and their habitat leading to more chances of exposure to new viruses, bacteria and other disease-causing pathogens.

Ecosystem health involves the health of the living and non-living components of the land and marine world. With the increase in human population and animal production, the Earth has experienced changes in climate and land use including deforestation and intensive farming practices. Contamination of the ecosystem by personal care products and pharmaceuticals has also been detected. Such changes and contamination may cause environmental degradation, pollution and ecological stress leading to potential negative impact on both human and animal health. 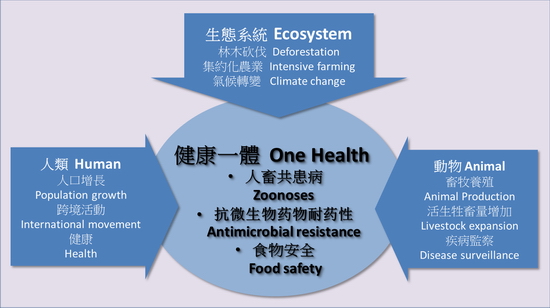 Key Issues Related to One Health

The One Health approach can enhance the collaboration between human, animal and ecosystem health sectors in order to address related issues, including but not limited to disease diagnosis, surveillance and control, combating existing and emerging diseases and zoonoses, antimicrobial resistance, food safety and food security and environmental health and environmental preservation. Some key issues related to food safety (see Fig) are highlighted below:

Zoonoses are diseases and infections that are naturally transmitted between vertebrate animals and humans, examples are rabies, avian influenza H5N1 and SARS. According to the WHO, at least 61% of all human pathogens are zoonotic and have represented 75% of all emerging pathogens during the past decade.

Antimicrobial resistance (AMR) is a growing public health threat of broad concern to countries and multiple sectors. It involves various resistance mechanisms affecting a wide range of bacteria, most of which are capable of causing diseases in humans and animals. AMR, especially multidrug resistance, has resulted in higher costs in health care, failure of treatments and deaths.

As mentioned above, the increase in food demand results in expansion of livestock population and worldwide transport of millions of tonnes of animal and agricultural products. Some food-borne diseases can also be of zoonotic in nature, which are caused by consumption of food contaminated by pathogenic microorganisms. Common food-borne zoonoses are Salmonellosis, Campylobacteriosis and infection by E. coli where if AMR presents, can become severe food-borne infections.

In the next issue, we will further illustrate One Health with more focus on food safety.