In late September 2016, two hairy crab samples collected at import level were found to contain dioxins and dioxin-like polychlorinated biphenyls (DL-PCBs) at a level exceeding the action level adopted by the Centre for Food Safety (CFS). To safeguard public health, the CFS suspended the import and sale within Hong Kong of the hairy crabs from the two concerned aquaculture farms in Jiangsu Province. In previous years, there were also reports of contamination of food with dioxins and DL-PCBs in other parts of the world. For example, in 2008, elevated levels of dioxins and DL-PCBs were found in Irish pork and in 1999, high levels of dioxins were found in pork, poultry and eggs from Belgium; the causes of these two incidents were traced to animal feed contaminated with dioxins and DL-PCBs.

What are Dioxins and DL-PCBs?

Dioxins and DL-PCBs are environmental pollutants with similar toxic effects. Their nature, sources and safety concerns have been discussed in the last issue. In brief, their long-term cumulative risk to health includes developmental problems in children and reproductive problems in adults as well as cancer-causing in humans.

How do Dioxins and DL-PCBs Contaminate Hairy Crabs?

Hairy crabs occur in streams, rivers and lakes. They scavenge for food at the bottom of habitats and eat almost everything they can find. Dioxins and DL-PCBs, once released, contaminate soil surfaces and aquatic sediments leading to bioaccumulation and biomagnification (i.e. increasing concentration) of the contaminants through the food chain (see Fig). 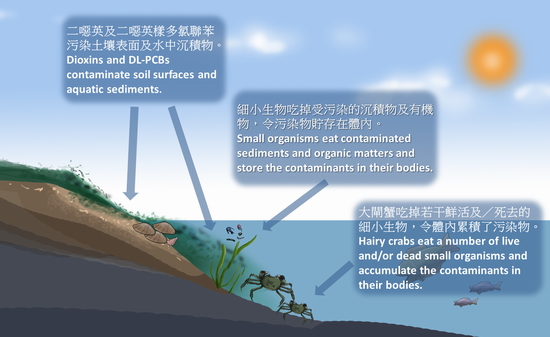 Bioaccumulation and Biomagnification of Dioxins and Polychlorinated Biphenyls in Hairy Crabs

Which Parts of Hairy Crabs Contain More Dioxins and DL-PCBs?

The edible portion of hairy crabs can broadly be divided into white meat and brown meat. White meat is white in colour and is present in the claws, legs and also in the body. Brown meat is brownish-green and is obtained from the main body of the crab. It consists mainly of the crab's digestive organ (hepatopancreas) and reproductive organs.

The amount of fat in brown meat (i.e. digestive and reproductive organs) is much higher than that in white meat. Since dioxins and DL-PCBs are fat-soluble, they tend to accumulate in the brown meat. A study commissioned by the Dutch Food and Consumer Product Safety Authority in 2012 showed that brown meat of hairy crabs sampled from some polluted rivers may contain dioxins and DL-PCBs at levels 15 to 115 times higher than that in white meat. Based on the average levels of dioxins and DL-PCBs (29.1 pg TEQ/g) in 9 locations in the Netherlands, the study estimated that the PTMI (a health-based guidance value) for dioxins and DL-PCBs would be exceeded by consumers with a high background exposure when a portion of 50 g meat (i.e. about 1.3 tael) of hairy crab (about a 3-tael crab) is consumed once a month.

At present, the Codex Alimentarius Commission has not established maximum limits for dioxins and DL-PCBs in foods. In Hong Kong, an action level of 1 pg/g for dioxins for all food commodities (including hairy crabs) has been adopted in the food surveillance programme since 1999. An action level of 6.5 pg/g for the sum of dioxins and DL-PCBs in hairy crabs have been adopted by CFS.

Dioxins and DL-PCBs are found throughout the world in the environment and all people have background exposure which is not expected to affect human health. Nonetheless, the World Health Organization opines that the reduction of body burdens (level in the body) is a long-term strategy and is probably most relevant for girls and young women to reduce exposure of the developing fetus and when breastfeeding infants later on in life.