In this article, we review the foodborne disease outbreaks related to local food premises and food businesses reported to the Centre for Food Safety (CFS) in 2015.

In collaboration with the Department of Health (DH), the CFS is responsible for the investigation and control of foodborne disease outbreaks related to local food premises and food businesses. In 2015, the CFS received 256 referrals from the DH on foodborne disease outbreaks affecting 993 persons. Over the past decade, the number of referrals decreased from 859 in 2006 to 279 in 2010, and has since remained stable between 216 and 350 per year (see Figure). 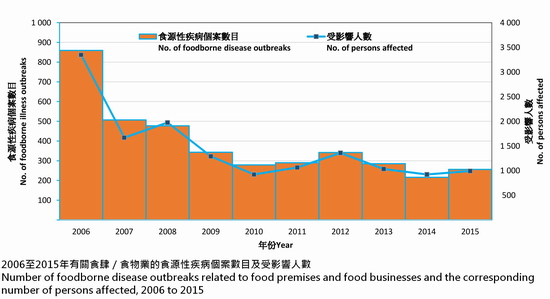 Bacterial foodborne agents remained the leading cause (78%) of all foodborne disease outbreaks in 2015. Salmonella , Vibrio parahaemolyticus and Clostridium perfringens were the top three agents. For the viral causes, norovirus, associated with the consumption of raw or undercooked bivalves, was the commonest viral agent causing 9% of all the outbreak referrals.

Of the 256 cases investigated last year, contamination by raw food, inadequate cooking and contaminated raw food (food to be consumed raw) were the most frequently identified contributing factors.

Between July and August 2015, there were a total of 34 clusters of Salmonella food poisoning outbreaks notified to the DH which involved 96 patients consuming different varieties of "Hung Rui Chen" sandwiches purchased through various channels. All patients have since recovered without serious complications.

Investigation showed that the incriminated sandwiches were manufactured and prepackaged in Taiwan, and imported or brought by different importers or individuals into Hong Kong. Identical Salmonella Enteritidis strain was isolated from patients of 10 clusters as well as unconsumed sandwiches collected from the patients of one cluster. Of note, the same outbreak strain was isolated from the stool specimen of one patient who purchased the sandwiches directly from a shop at the Taiwan Taoyuan International Airport. The available findings pointed to a common source of contamination and the site of contamination was likely to have occurred outside Hong Kong before the sandwiches were packaged. Subsequent prolonged and improper storage of the sandwiches might have provided favourable conditions for the bacteria to grow and thus aggravated the size of the outbreak.

Upon knowing the incident at the initial stage, the CFS immediately followed up with the trade, traced the sources and distribution of the affected products, and urged the public not to consume the affected products that were brought into Hong Kong by themselves or purchased from shops or online. The trade was reminded to stop selling or using the affected products. To safeguard public health, the CFS banned all "Hung Rui Chen" sandwiches from being imported into and sold in Hong Kong on 3 August 2015.

Enhanced inspection and surveillance of selling of the sandwich in question at retail outlets, collection points and online were mounted. No sale of the remaining stock of affected products was detected in any of these channels. Furthermore, the CFS also enhanced food safety publicity regarding the microbiological risks of perishable foods such as sandwiches.

In September 2015, there was a major food poisoning outbreak affecting 120 children and staff of a school. All affected persons had consumed the same type of lunchboxes, suspected to be contaminated with C. perfringens , that were provided by a food factory.

The CFS visited the food factory and the school immediately upon receipt of notification. It was found that the cooked food ingredients were delivered to the school earlier than usual on the day of consumption of the meal in question and the documentation of temperature control was less than satisfactory. The CFS instructed the catering service to follow good food safety practices, particularly in keeping the cooked food for lunchboxes at a proper holding temperature before consumption. Enhanced follow-up inspections to the concerned food factory were conducted and no further related cases were reported afterwards.

Large-scale school lunchbox food poisoning outbreaks do occur from time to time locally. C. perfringens , commonly present in raw meat and poultry, is a well-recognised cause for foodborne disease in this setting. As the foods are prepared in large quantities in advance and supplying a relatively large number of persons, any lapse in food safety measures may lead to large-scale food poisoning outbreaks. The providers must cook the food thoroughly and keep them at safe temperatures, i.e. above 60˚C or at or below 4˚C, as effective preventive measures.

The number of foodborne disease outbreaks has remained at a relatively low level over the past few years as compared with previous years. While the CFS will continue to be vigilant in safeguarding food safety, the trade and the public need to recognise the risks involved and adopt and adhere to the "Five Keys to Food Safety".