In the previous issue, we discussed some of the Group 1 carcinogens that are more commonly found in locally consumed foods. In this issue, we will discuss the relationship between consumption of alcoholic beverages and cancer.

Although Group 1 agents are deemed "carcinogenic to humans" by the IARC, some cannot be totally eliminated from the food supply due to their ubiquitous nature. We can, however, avoid consuming some of the food that contains carcinogens as their consumptions is a matter of lifestyle choices.

Consumption of alcoholic beverages is entrenched in many cultures, especially during festivities. Drinking is quite common among the population of Hong Kong. Locally, according to a Department of Health (DH) survey in 2014, about 62.7% of the adult population had at least one drink in the past year, and about 6.8% of the adults engaged in binge drinking (i.e. at least five glasses or cans of alcoholic drinks on one occasion) at least once a month. The per capita consumption of alcohol in Hong Kong per year from 2004 to 2014 stood between 2.53 and 2.87 litres. A surge was observed in 2008 due to the exemption of duty for wine and liquor of an alcoholic strength not more than 30% in that year. From 2009 to 2014, the alcohol consumption per capita of Hong Kong showed an increasing trend. 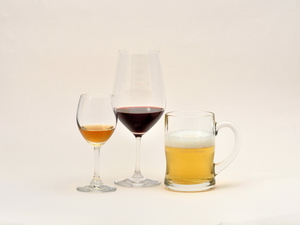 Understanding what a "unit of alcohol" is (i.e. contains about 12ml by volume or 9.5g by weight of alcohol) can facilitate monitoring the amount of drinks consumed.
From left to right, each is equivalent to one unit of alcohol: 1 pub measure (~30ml) of hard liquor with 40% alcohol; 1 small glass (~100ml) of wine with 12% alcohol; and ¾ can (~250ml) of beer with 5% alcohol. Reference: Department of Health

However, alcoholic beverages consumption, especially excessive consumption, can impact health, including likelihood of cancers. The International Agency for Research on Cancer (IARC) of the World Health Organization classified the consumption of alcoholic beverages as carcinogenic to humans (Group 1 agent) in 2007. Studies from around the world have consistently shown that regular alcohol consumption is associated with an increased risk for oral, pharyngeal, laryngeal and oesophageal cancers. When compared with people who do not drink, consumption of about 50g of alcohol (about 5.3 units) daily will increase the risk of the above cancers two to three times. Another research has found that daily consumption of 50g of alcohol will increase the risk of breast cancer 1.5 times when compared with non-drinkers.

The effect of smoking and drinking on cancer seems to multiply the risk. Additionally, many studies suggest that alcohol consumption is a risk factor for liver cancer. Drinking can also cause many non-cancer health problems, affecting the heart, brain, liver, mouth, gut, sex organs and the mind.

Moreover, drinking will expose drinkers to acetaldehyde. It is a chemical formed during alcohol fermentation and converted inside the body after alcohol consumption. The IARC has also classified acetaldehyde associated with consumption of alcoholic beverages as carcinogenic to humans (Group 1 agent). Acetaldehyde is especially harmful for up to 30% of the East Asian populations, as they have only about 10% of the enzyme activities that breakdown acetaldehyde, due to a genetic condition. This will lead to a higher risk of alcohol-related oesophageal, head and neck cancers when compared with the rest of the population.

Benefits of Alcohol Consumption – Is It True?

The DH considers that although some researchers found that drinking moderate amounts of alcohol may be associated with better heart health in certain populations, the evidence remains controversial. If one is looking to protect the heart, healthy eating and maintaining an active lifestyle are effective means to achieve protection.

If you want to improve health, do not start drinking if you do not drink at all. If you decide to drink, limit the amount of drinks to minimise the harm. For alcohol-related cancers, the larger the amount consumed, the higher the risk for the cancers.