This article reviews the food poisoning outbreaks related to local food premises and food business that were reported to the Centre for Food Safety (CFS) of the Food and Environmental Hygiene Department in 2014.

Food poisoning is a statutory notifiable disease in Hong Kong. To protect public health, the CFS, in collaboration with the Department of Health (DH), is responsible for the investigation and control of food poisoning outbreaks related to local food premises and food business. In 2014, the CFS received 216 food poisoning cases referred from the DH which affected 924 persons. The annual number of referred cases decreased generally from 2006 to 2010 and had since remained relatively stable over the past few years, ranging from 216 to 350 cases per year (see Figure). 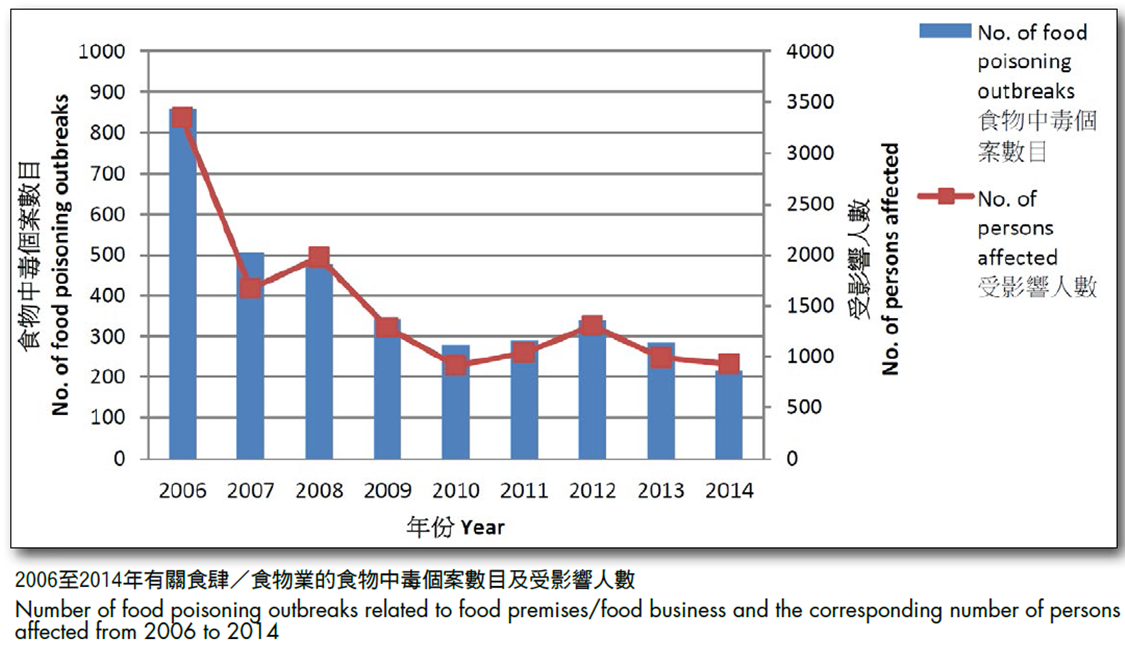 Bacterial foodborne agents remained the leading causes (80%) of all food poisoning outbreaks in 2014, with Vibrio parahaemolyticus , Salmonella and Bacillus cereus being the top three bacterial pathogens. For the viral causes, norovirus, found to be the only incriminated viral agent causing around 12% of all the cases referred to the CFS.

Of the 216 cases investigated last year, contaminated raw food (food to be eaten raw), improper holding temperature and inadequate cooking were the most frequently identified contributing factors. The importance of good hygiene and food safety practices in safeguarding food safety are illustrated by the following two major food poisoning outbreaks that occurred in 2014.

Norovirus has been an important causative agent of viral food poisoning around the world. In Hong Kong, raw oyster is identified as the most commonly incriminated food for foodborne norovirus outbreaks. Norovirus can be transmitted via consumption of food or water contaminated with the virus. Norovirus is relatively heat and acid resistant. Hence, thorough cooking is required to kill norovirus in oysters.

In January 2014, the CFS received from the DH four food poisoning outbreaks related to the consumption of raw oysters in three food premises, affecting 22 persons. Investigation revealed a common source of oyster (Ireland) in all clusters. Trade alert was issued to the relevant traders and import of oysters from the affected area in Ireland was suspended. No further related cases occurred afterwards.

Clostridium perfringens is a spore-forming bacterium which commonly presents in raw meat and poultry. Outbreaks of Clostridium perfringens often happen when food is prepared in large quantities and kept under inappropriate holding temperature for a prolonged period. Preventive measures include thorough cooking of food and keeping food at the safe temperatures, i.e. above 60˚C or at or below 4˚C.

In June 2014, the CFS was informed of a major food poisoning case involving 93 school children. Epidemiological information revealed that the incriminated lunch boxes suspected to be contaminated with Clostridium perfringens were provided by a food factory. Investigation revealed that improper holding temperature of the lunch box meals during transport from the food factory to school for seven hours or more was suspected to be the contributing factor leading to food poisoning. The CFS instructed the food factory to follow good food safety practices, particularly keeping the lunch boxes at proper holding temperature. No further related cases were reported afterwards.

Although the number of food poisoning outbreaks has remained at a relatively low level over the past few years, there is no room for complacency. While the government will continue to be vigilant in safeguarding food safety, the trade and the public are advised to adopt and adhere to the "Five Keys to Food Safety" in order to prevent the occurrence of future outbreaks