At one point or another, some of us may have heard that poultry are injected with hormones to promote growth. There are concerns that consuming such tainted poultry products could lead to the development of cancer, as well as early menarche and premature sexual development in young girls. Are these myths or facts?

There are natural and synthetic hormones. Natural hormones are produced by bodily organs and transported into the bloodstream to target sites to regulate physiological responses such as growth, development and reproduction. Synthetic hormones, on the other hand, are made to mimic the actions of their natural counterparts. Diethylstilboestrol (DES) and hexoestrol, examples of stilbenes which is a group of synthetic oestrogen hormones, were used in poultry production in the US (in the 1950s) and Hong Kong respectively. As stilbenes are protein hormones which would be broken down after ingestion and become non-functional, they need to be given by frequent injections or pellet (e.g. hexoestrol) implanted under the skin.

DES is considered carcinogenic to humans by the International Agency for Research on Cancer (IARC) in its evaluation in 1987. Taking this into consideration, the Codex Alimentarius Commission, an international food standard setting body, does not recommend a safe level for DES in food. Stilbenes including DES are currently banned to be used in poultry in places such as Hong Kong, the Mainland, Australia, the European Union and the US. 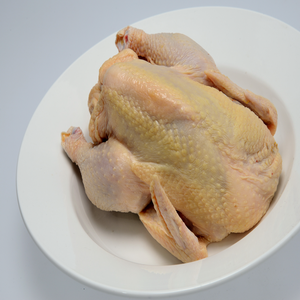 In the late 1970s, there were concerns about the consumption of beef and poultry contaminated with stilbene residues in school meals causing breast enlargement in very young children in Italy. However, the result of investigation was inconclusive due to the fact that the suspected beef and poultry samples were not available for testing.

In the 1980s, increased number of girls in Puerto Rico reaching puberty at the age of eight or earlier led to an investigation on stilbene residues in meat and poultry. Although a poultry sample obtained from the domestic market was shown to have higher than normal level of oestrogen, the result could not be verified by further laboratory testing. After considering all available evidence, the investigating authority eliminated hormones in meat as the likely cause.

Likelihood of Stilbenes Still in Use

There is insufficient evidence to show that stilbenes enhance growth of poultry. But stilbenes, including DES, increase fatness of poultry especially the muscle at the breast and leg areas to give the "juiciness" of meat. Such characteristics are no longer welcomed by consumers, as they now have a preference for lean poultry products, rather than fat.

Over the years, the rapid growth of modern commercial poultry has been largely attributed to genetic, nutrition, husbandry and health improvements. Birds with desirable traits are selected and bred for production. Advances in nutrition allows poultry producers to provide the exact amount of carbohydrate, protein, fat, minerals and vitamins in feed to maximise the growth rate. In addition, modern poultry farms provide a well-maintained environment with better disease prevention and management to ensure the birds reach the desired performance and growth rate.

Three stilbenes, namely DES, hexoestrol and dienoestrol, including their salts and esters, are prohibited chemicals/substances under the Public Health (Animals and Birds) (Chemical Residues) Regulation (Cap 139N) and the Harmful Substances in Food Regulations (Cap 132AF). Using any of them in poultry and poultry products is illegal. To ensure poultry and poultry products are fit for human consumption, the regulatory bodies also conduct surveillance of the above prohibited chemicals at local poultry farms, as well as at import, wholesale and retail levels. There were no positive cases detected from 2008 to 2014.